Three weeks after the biggest event in off-road racing, the dust finally settled in Las Vegas. Year after year, The Great American Off-Road Race leaves its mark on Las Vegas, NV and the 2015 Polaris RZR Mint 400 presented by General Tire was no different. With every aspect of the event expanding in some capacity since its rebirth in 2009, The Mint is no longer repairing the foundation set by its founders in the late 60’s and early 70’s. It’s stacking bricks, garnering tremendous support from the off-road racing community, external mainstream media, general automotive enthusiasts and the Entertainment Capitol of the World itself. In short, The Mint 400 is turning heads and the world is starting to realize the impact of off-road racing on a global scale. Here’s a look back on the 2015 Polaris RZR Mint 400 presented by General Tire.

The sound of testosterone, horsepower, and the smell of race fuel echoed off hotel and casino walls as 100 race vehicles marched down The Las Vegas Strip in the 4 Wheel Parts Mint 400 Vehicle Parade to officially start the 2015 Polaris RZR Mint 400, Presented by General Tire.  Leading the parade was this years Grand Marshall and off-road racing legend Larry Ragland, who escorted the convoy in his iconic Class 1 car (which one the 1986 Mint 400) nicknamed “Tetanus” by his mechanics. Ragland and millions of dollars of off-road technology followed him down the famous Las Vegas strip. 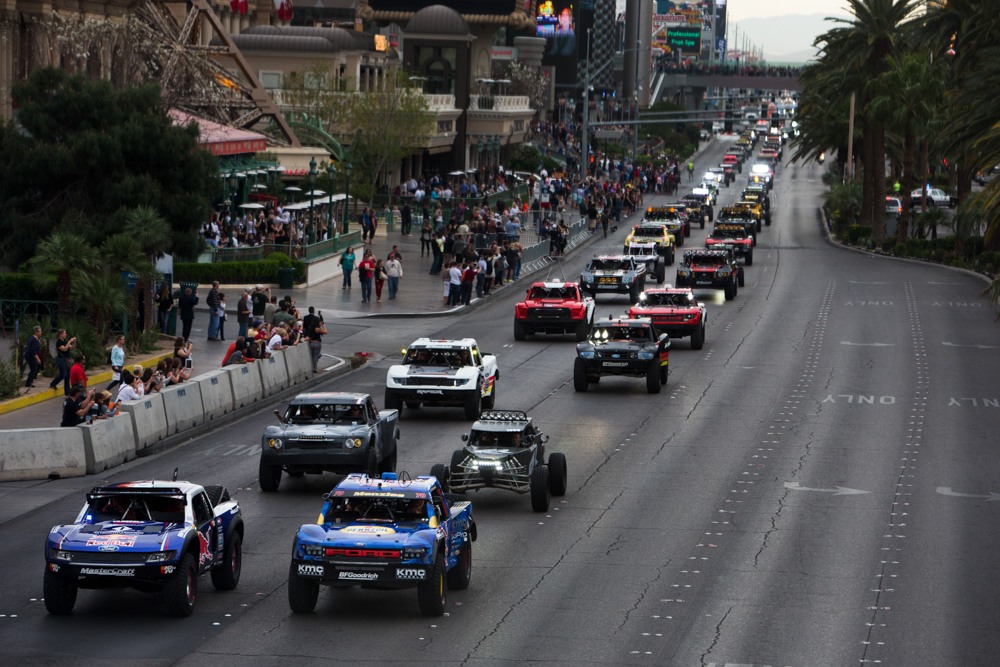 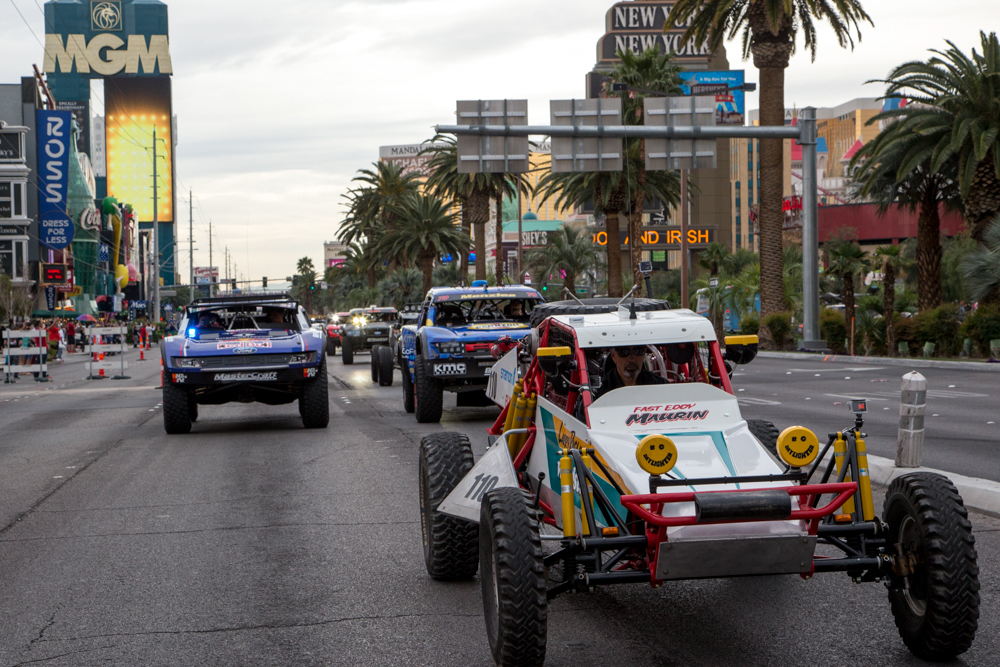 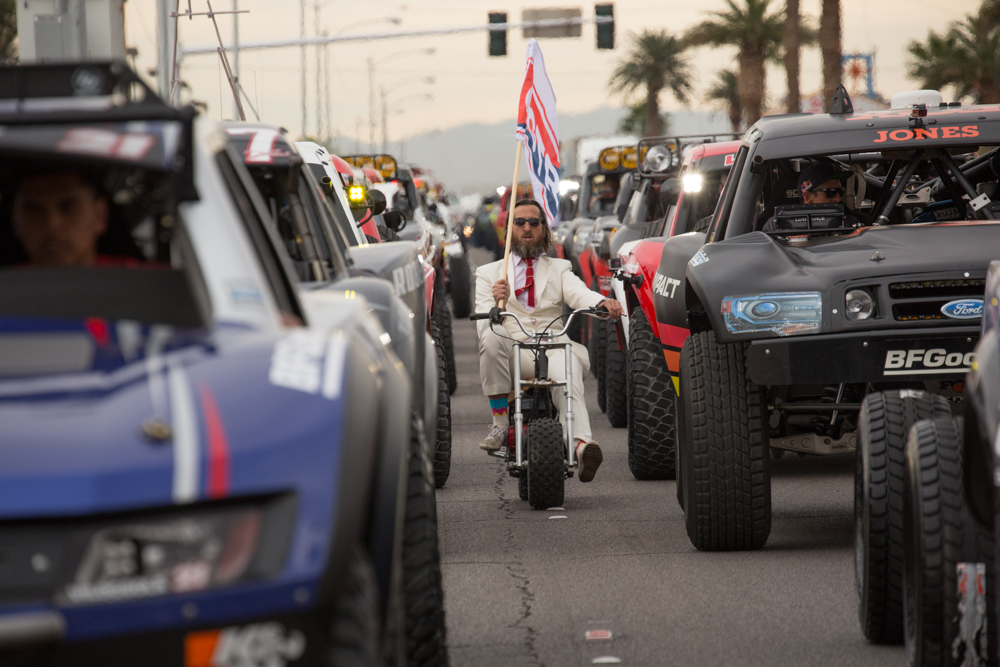 The KMC Wheels Mint 400 Pit Crew Challenge Presented by Mystik Lubricants has become a staple event each year at the Mint 400, and with the exponential growth of the famed race so has the number of teams wanting in on the competition to not only showcase how good their pit teams are, but also to have the chance to win some great prizes from our sponsors.  This year because of the increased interest, a qualifying session was held today and was open to all classes. The Trick Truck (1400) and 1500 Classes each qualified for open spots in the main event on Thursday, where they will meet teams already seeded in the main event. For all other classes, the top two times will be taken to the main event on Thursday, March 12th in a do or die battle to claim the top pit crew in the class! 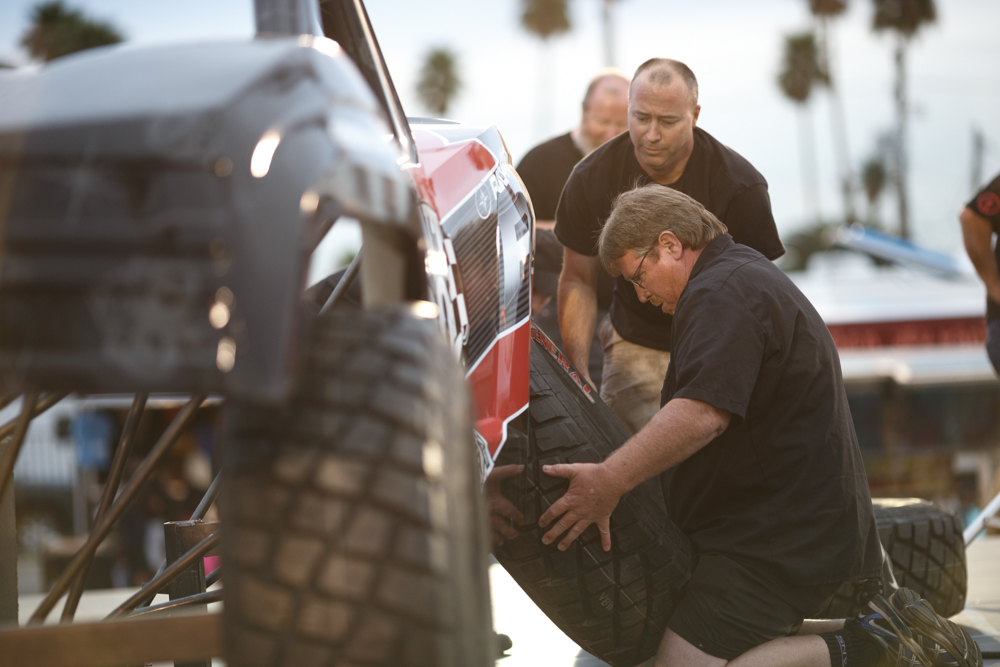 Different this year the qualifying loop was set in front of the Buffalo Bills Hotel & Casino so that fans could get get a glimpse of what is to come on race day. Normally qualifying is held out deep in the desert and not open to public but in bringing offroad closer to the fans, BITD and Mad Media made the decision to bring the time trials to the spectators.  Starting on the short course track racers then transitioned into the dirt behind Buffalo Bills where it zigzagged on itself before finishing at the “Flying Finish” in front of hundreds of spectators.  It was a close finish with Dondel laying down a time of 4 Minutes and 7 Seconds with BJ Baldwin right behind him by only one and a half seconds. Drivers before hand thought the tight course may give the Class 1500 cars and advantage, but the first car qualified 10th in Eduardo Laguna. Only 5 seconds separated the top 10 so any little mistake really counted on this course.

We  crowned a new Miss Mint who join the likes of past Miss Mint’s Vanna White and Lynda Carter, along with recent winners Dani Mathers and Taylor Cox. Your 2015 Miss Mint is none other then the beautiful Amy Scott of Solona Beach, CA. Of 6 final contestants Amy was selected to represent The Mint 400 for the next year, and in doing so will take home $5,000 to go along with the title of 2015 Miss Mint. 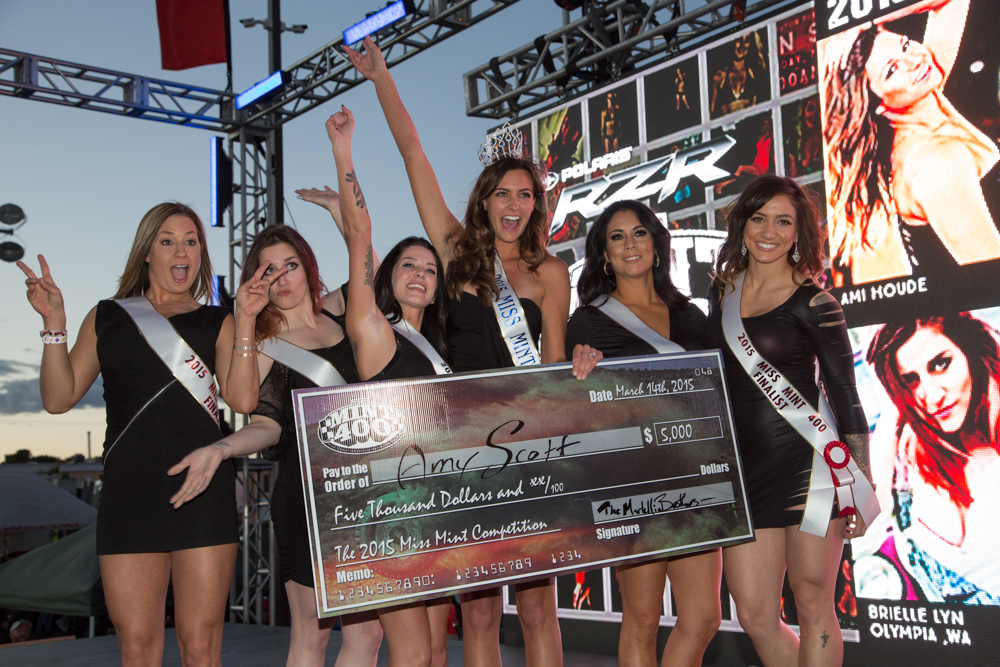 The final event of the night at the Mint Experience was the KMC Wheel Pit Crew Challenge Presented by Mystik Lubricants. 4 Class 1500 teams and 10 Trick Trucks battled to take home some great prizes from Fox Shox, Impact Safety, KMC Wheels, Mystic Lubricants, and 212 Performance Gloves. To have a great team it doesn’t just take a great driver but a team behind them, and that is what the Pit Crew Challenge shows us. With racing so competitive nowadays a pit stop can win or lose a race, and having a crew that can handle that stress is key to winning.  The favorites going into the event were the teams of TSCO Racing (last years winner), Menzies Motorsports, and Jesse Jones team, but it was a team who qualified last night to grab a spot who took home the trophy. Steve Strobel and crew laid down a faster time in the head to head final with Steve Olliges, but two loose lug nuts would give them a 10 second penalty, and with that the win would go to Olliges. In Class 1500 the COPS Racing crew helped put Steve Hengiveld’s car on top against Ryan Hancock and crew. 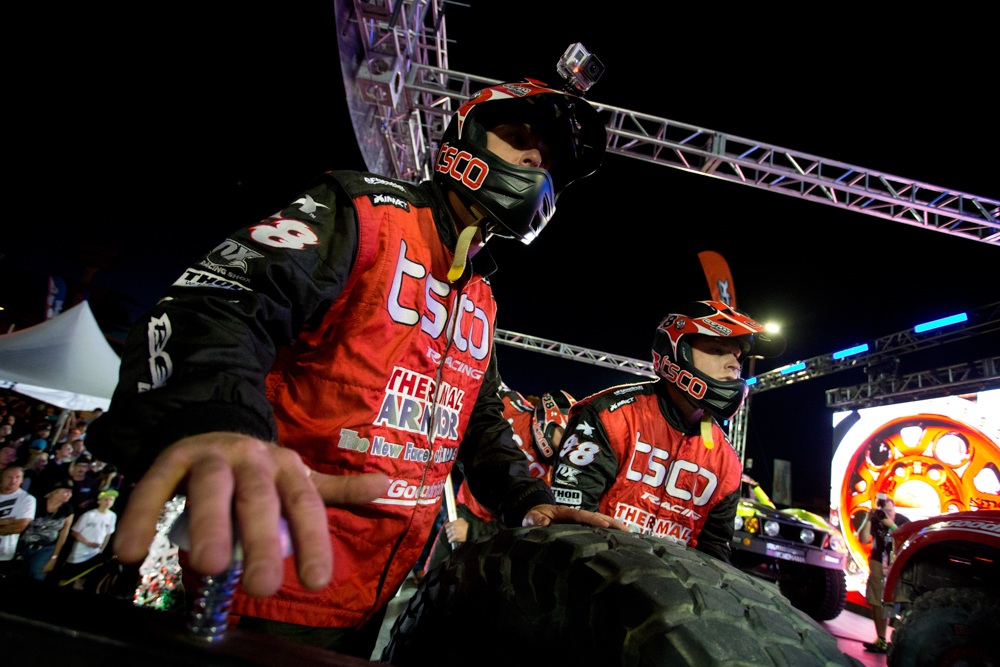 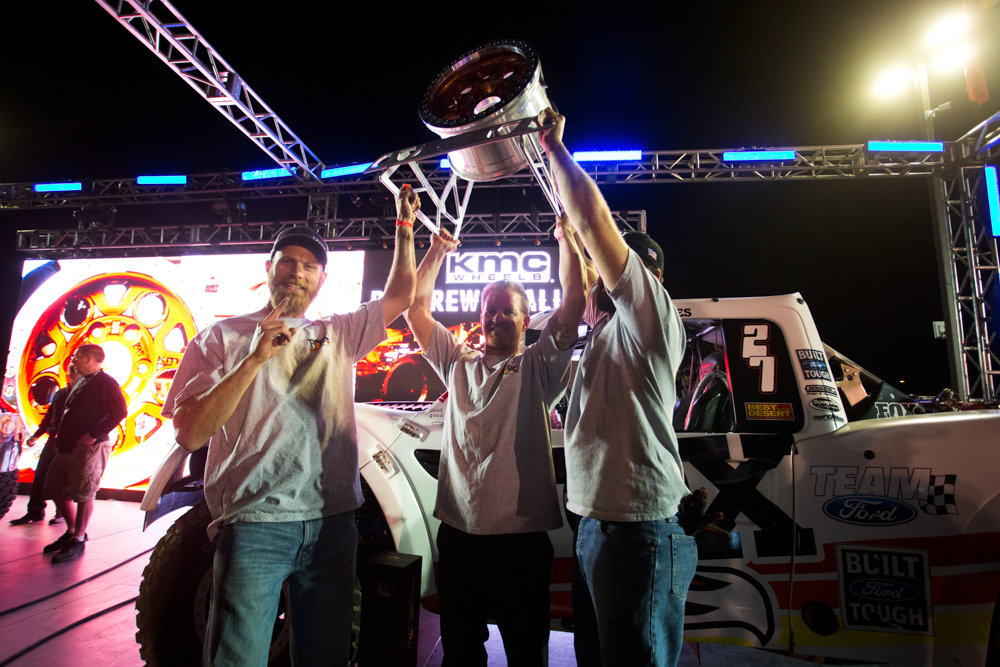 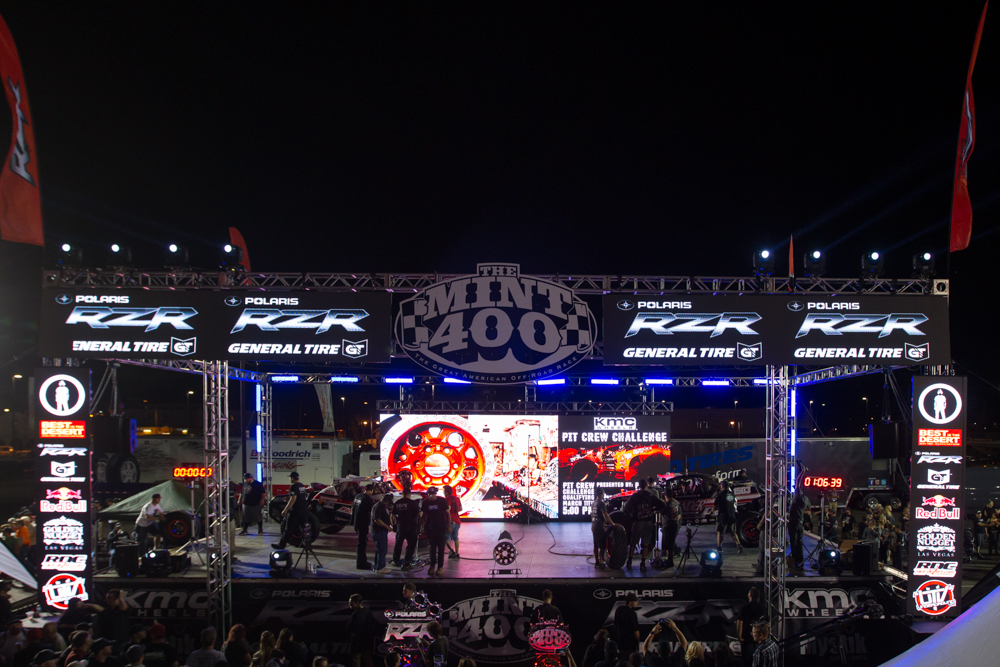 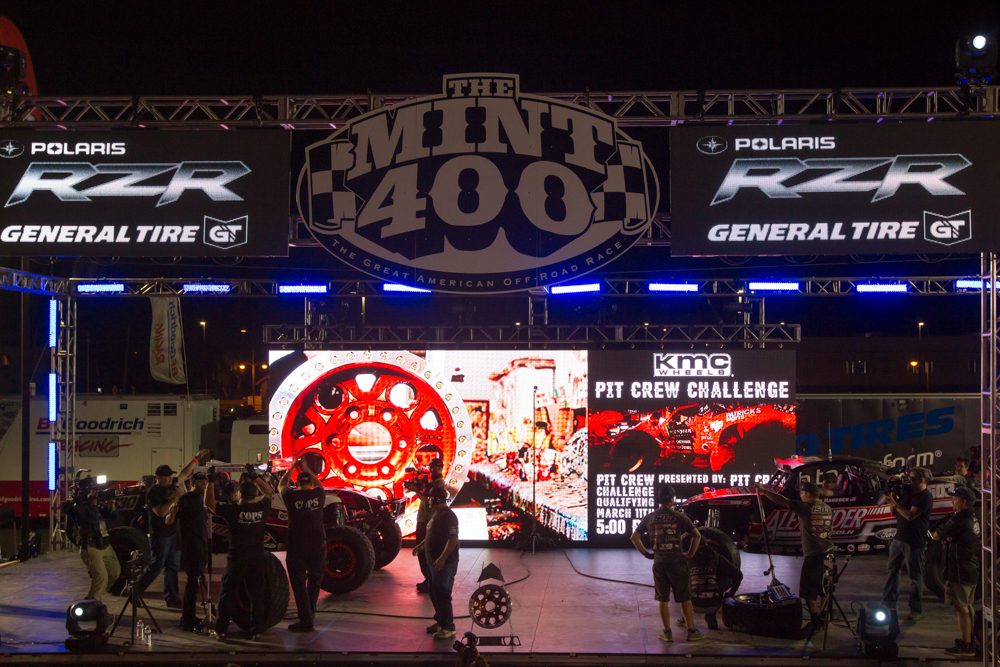 Today was the calm before the storm where teams paraded their race vehicles down Freemont Street for technical inspection and contingency. Showing the Mint’s expansion vendor row stretched longer then it ever has before in what seemed like an endless row of companies displaying their products for both racers and fans.  Always fan friendly, companies were passing out tons of stickers, posters, coozies, t-shits, and some even had drivers there to sign autographs and pose for photos with fans.  Over 300 vehicles made the long trek down Freemont Street in what is a prelude to the biggest offroad race of the year. 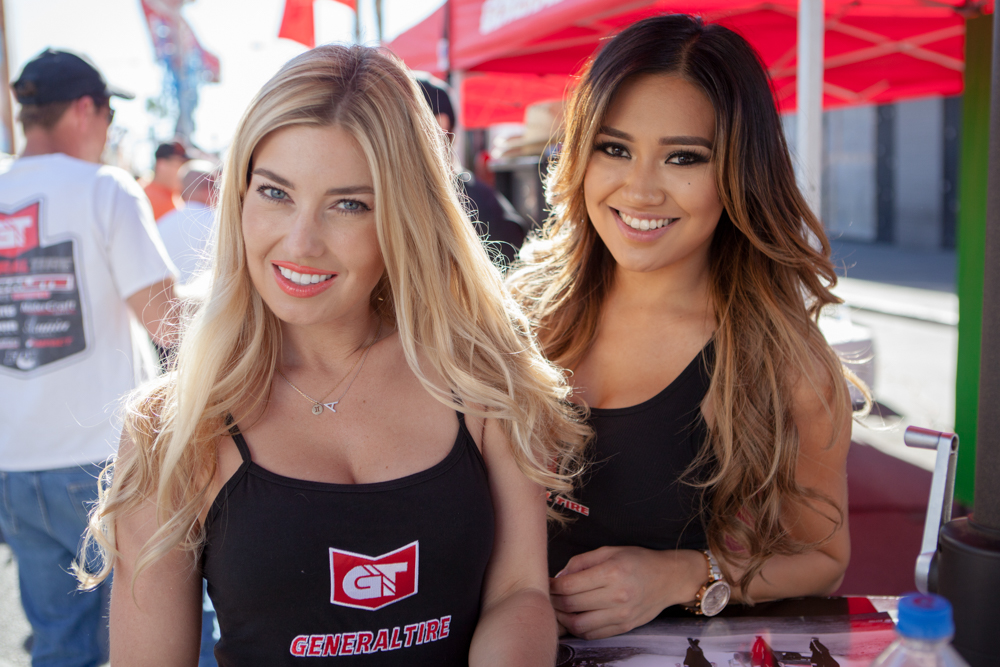 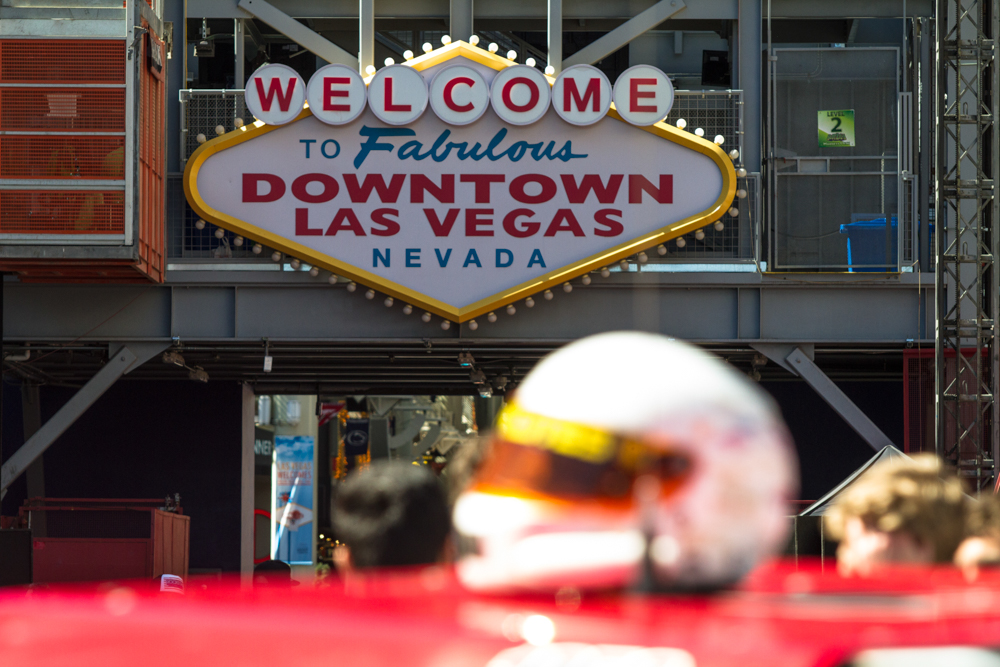 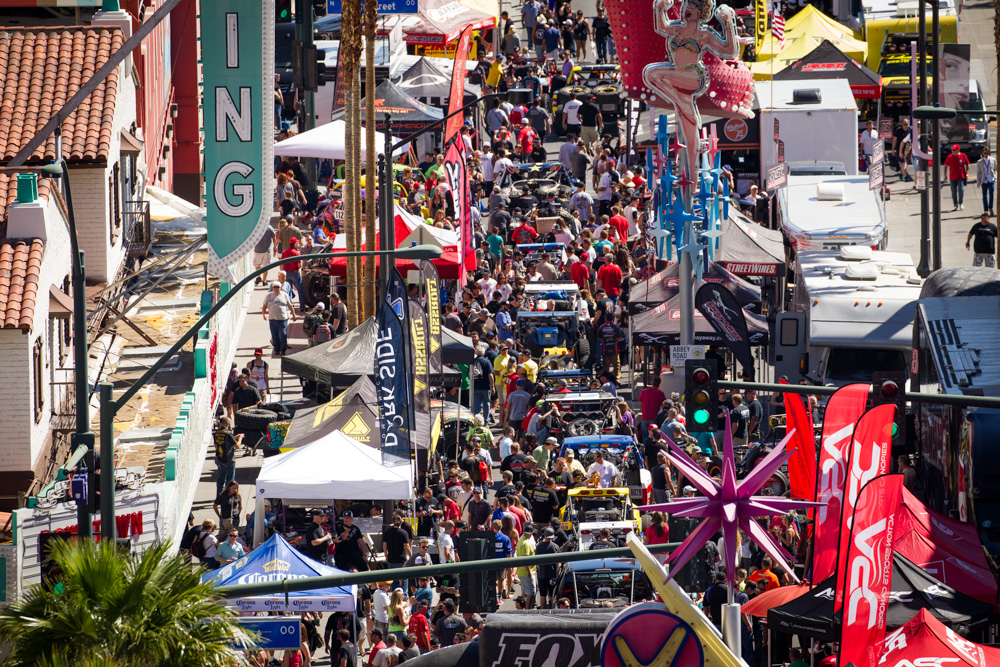 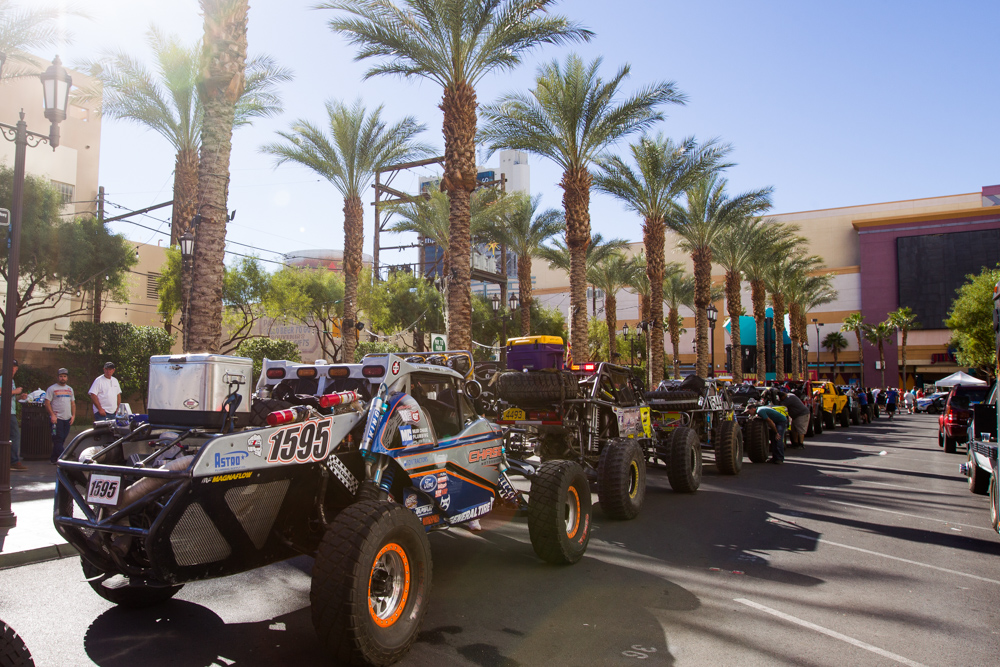 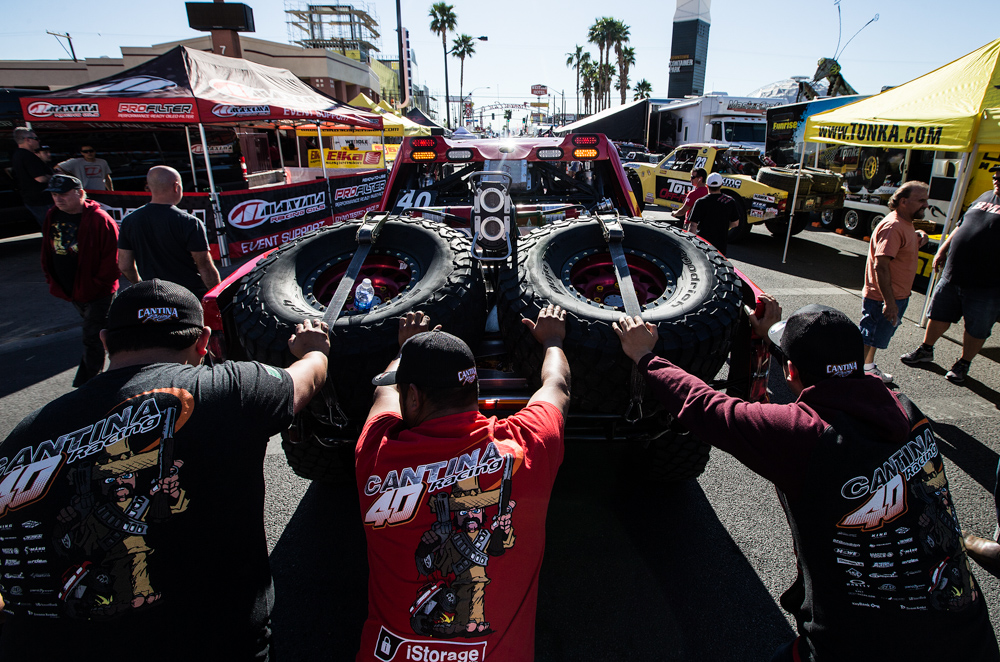 In the predawn hours on Saturday morning the soothing rumble of high flow exhaust filled the Primm Valley. Racers lined the infield at Buffalo Bill’s Casino, departing in pairs to take on whatever the course had in store. Dust filled the air as the sun crested the mountain, ensuring that the drivers would have to put some faith in their instincts (and navigational equipment) as they pressed on.  The winner of the mornings three lap race was none other then Roger Starkey in his single seat Class 1000 car. “What a race!” Starkey said on the podium. “This is the second time we’ve run The Mint, but the first time we’ve won it. We started out in third and got out in front, so we only had to worry about someone catching up. It was unbelievable. The course was great…real fast…getting a little chewed up. It couldn’t be better.” Starkey finished unofficially with a time of 6:26:16, just a little under two minutes in front of second place. 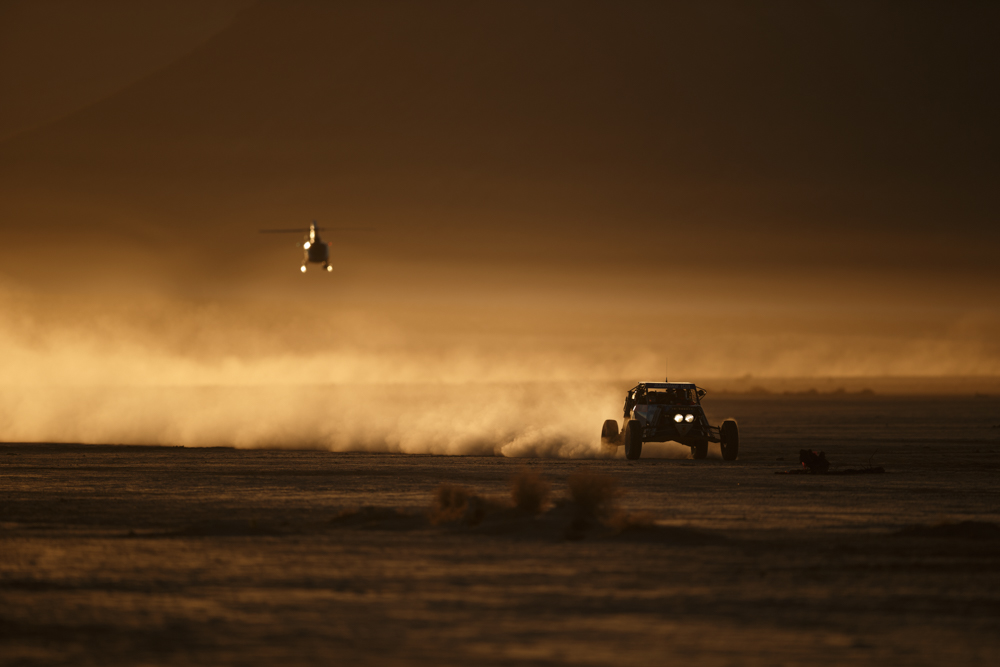 The overall first place finisher, Justin Lofton (#41), lost a tire about 4 miles into the race and his rear brakes at the beginning of the third lap. “We did the whole last lap with no rear brakes, which doesn’t seem so bad…it slowed me down, which probably helped get me to the finish line in this thing.”  Robby Gordon had pushed his #77 machine to (in his own estimation) a 12 minute lead before the race was temporarily red flagged for an accident cleanup and emergency response, once the cars were tightened and the race resumed he went on to place second. Third place Rob MacCachren lost a driveshaft during the race, yet still only finished about 8 minutes behind Lofton. Carlos Lopez (#11) and Gustavo Vildosola Jr rounded out the top five. 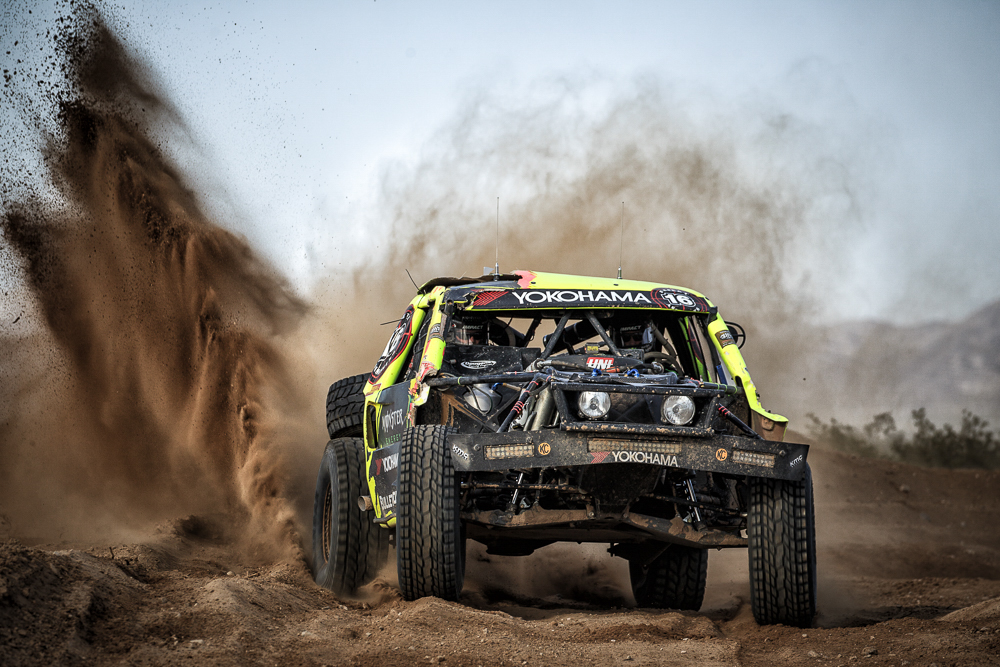