The legendary Mint 400 is an annual off-road race started in 1967 known as “The Great American Desert Race”. Held just north of Las Vegas, NV the race is a 400-mile test of man and machine alike. The race is well known as being one of the toughest and roughest courses in all off-road racing. The Mint 400 has a rich and storied history with entrants from around the world that have included some of the most well-known names from all racing genres as well as the television and motion picture industry. The race was depicted in 1971 in Hunter S. Thompson’s epic novel “Fear and Loathing in Las Vegas”, which was later made into a feature film starring Johnny Depp and Benicio del Toro. This year’s race took place March 25th -28th and had over 300 participants in 24 Classes. The course features the infamous “Rock Garden”, silt beds, miles of rocky moon-hills, sandy washes, and high speed graded roads.

Friday the 26th all Trophy Truck and Class 1 cars were given the chance to qualify for position. BJ was determined to qualify in the front and had a solid start but was distracted when a water bottle came loose and began sliding around behind his brake and gas peddle. “I couldn’t believe the bottle started to roll around beneath my feet. At one point I was holding it down with my left foot and using my right foot to brake and gas. It cost me time for sure,” stated BJ. Despite the distraction BJ still managed to qualify 4th out of 50 unlimited competitors.

Saturday the 27th BJ started the race 4th off the line and was moving up through traffic and dust when he struck a large boulder with his left front wheel near race mile 11. “I was trying to be patient. I wanted to be out front, out of the dust as quick as possible. The dust was terrible. I went wide to pass Spruole and there is this 5-second window when you are passing when you can’t see anything and that’s when I hit the boulder. It ripped the whole right wheel off and jerked the truck and started to endo, I can’t believe we didn’t crash,” stated BJ. He then got out of his truck then went back to wait in the main pit for his father, Bobby Baldwin to bring his truck around. BJ explained, “We decided to put Chad Ragland who was supposed to be driving with my dad back in my truck once it was fixed. I wanted to get in my Dad’s truck and still go for the overall. My dad drove a great first lap coming in 5th on the road. I got in the #96 General Tire trophy truck and went for it! 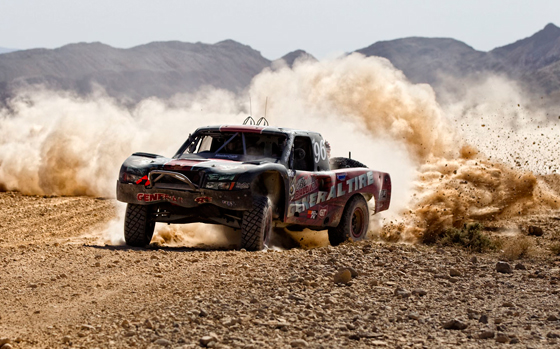 BJ rocketed out of the start finish, and began chasing down competitors. By the end of lap 2nd BJ was 2nd on the road despite having torque converter problems, which cause the transmission to over heat a high speeds. Just after the beginning of 3rd lap BJ lost all brakes, but managed to complete the whole lap with no brakes and still close the gap with the race leaders to within 10 seconds on corrected time. After fixing the bakes in the main pit BJ went back out with a vengeance, but more drama would ensue. While trying to pass 12 car on the 4th lap BJ hit a large rock and twisted the driveshaft. After spending 14 minutes changing the driveshaft BJ got back going and again began to chase down the race leaders. BJ ultimately crossed the line physically 2ndfinishing 2nd in trophy trucks only 11 minutes short of first place. “I love this race. It is really tough challenge; you can’t make any mistakes or your done. The course is brutal and get’s worse every lap. Congrats to Roger Norman and Larry Roessler, they qualified well and raced well all day. I was trying my best to catch them all day, but between dust, traffic and mechanical issues it just wasn’t in the cards for us. I had a blast racing against everybody! I can’t wait until next year to do it again!” commented BJ. 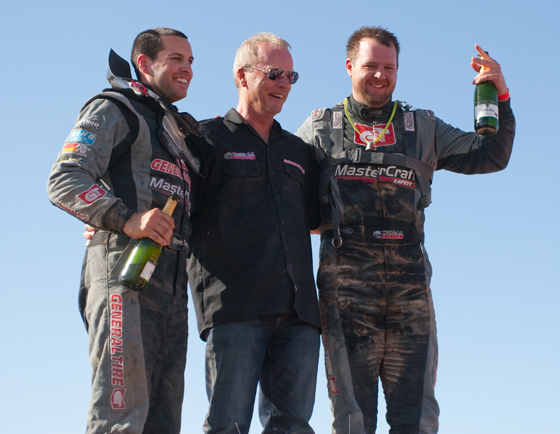