BJ Baldwin came into the 2011 General Tire SNORE Mint 400 with only one goal for the weekend: victory.  After overcoming a host of setbacks to earn a second place finish last year, the only room for improvement for Ballistic BJ was an overall win.  While some series have a drawing for starting position, SNORE holds qualifying to determine starting order.  This allowed Baldwin to rely on his skills instead of the luck of the draw.  The result: a first place qualifying position in his No. 97 General Tire / Monster Energy Unlimited Truck. The top qualifying position earned Baldwin a strategic advantage on the first lap of the four lap race with clean air when the green flag dropped for the 2011 General Tires SNORE Mint 400.

Held just north of his hometown of Las Vegas, Nevada, “The Great American Desert Race” is regarded as one of the most difficult and prestigious off-road races in the world.  The course features silt beds, miles of rocky moon-hills, sandy washes, high speed graded roads, and the infamous “Rock Garden”.  “This is the roughest course I have ever been on,” Baldwin commented after the race.  “It is worse than anything that Baja has to offer.”  After experiencing myriad problems in last year’s race, Ballistic BJ eased back to ensure the new No. 97 General Tire / Monster Energy Unlimited Truck could finish all four laps.  He battled with last year’s winner Roger Norman for much of the race, but BJ’s patience prevailed in the end.  The only issues this year for the No. 97 truck were a minor brake line problem, and the talented pit crew of Baldwin Motorsports got that resolved quickly.

“We definitely had a strategic advantage with our General tires and Method Race Wheels,” BJ admitted.  “There were a couple of instances when I had impacts that would have destroyed any other wheel or tire, but we didn’t have a single flat.”   BJ’s father Bobby Baldwin had an excellent weekend as well, sharing driving duties with Chad Ragland in “Rampage”, the SPD-built Unlimited Truck that BJ campaigned last year.  The duo of Ragland and Bobby Baldwin qualified third and finished in second place overall at the 2011 General Tires SNORE Mint 400, proving that speed is indeed hereditary. 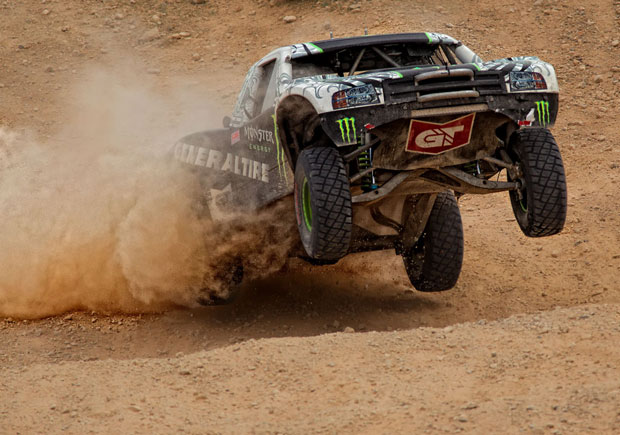 The next stop for Ballistic BJ Baldwin will be Best in the Desert’s Biltek Silver State 300 on April 29 – May 1 as he attempts to repeat his 2010 BITD season championship in the No. 97 General Tires / Monster Energy truck.  On June 3 – 5 Ballistic BJ will head to the Tecate SCORE Baja 500, a race that he won in 2008 on his way to a SCORE International season championship.