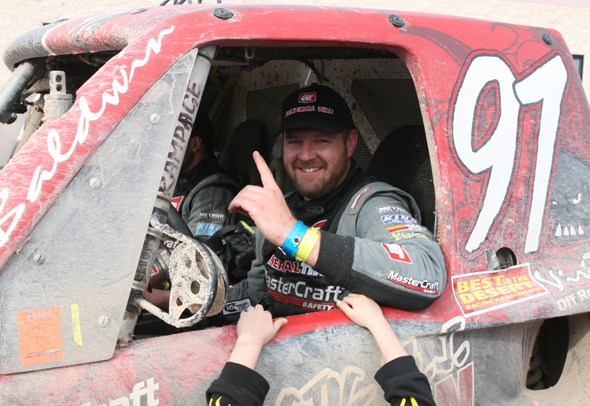 The Best in the Desert Parker 425 started in 1972, known then as the Norra Dam “500”, by 1974 the race had evolved to the Parker “400”, and continued to develop into one of the premier off-road races on American soil. Taking place along the banks of the Colorado River, the race features time trials pitting racers against the clock in a short dash for start position. The 140-mile loop features some of the most challenging terrain in America including sandy whoops, rocky washes, high speed graded roads, silt beds, and the crowd pleasing ” Parker Python” a spectator friendly winding infield section of the course.

On Thursday despite being 77th car to start qualifying BJ had a solid qualifying run finishing 4th setting him up for a dust free first lap. The weather also worked in the favor of racers with frequent light rains dust would be much less of a factor than previous years. The race started at daybreak on Saturday February 6th as the vehicles rocketed out of downtown Parker off-into the treacherous Arizona desert. BJ was off to a good start keeping a constant pace, pressuring the top race field. On lap one BJ had a quick-release mechanism fail causing the spare tire to fall off the rear of the truck. Shortly their after BJ received his one and only flat while in the dust passing a fellow competitor. The tire held up until the truck was at 126 mph on fence line road. By lap 2 BJ had gained position on time but kept steadily moving up. By lap 3 BJ had the lead both physically and on corrected time.

“Ballistic” BJ Baldwin won the grueling race in domination fashion finishing 19 minutes ahead of the nearest vehicle and 39 minutes ahead of the next trophy truck. Shaking off a rough 2009 season BJ had this to say about the victory; “It feels great to be back on top of the podium. We had a great race with very little problems. The truck ran great and we came prepared. We had some radio issues after we knocked our antenna off, but other than that we ran pretty much problem free. I was just trying to be steady and let the race come to me. It was hard to not push hard the whole time. There was a lot of good competition, but I just tried to run my race and not worry too much about any body else. I have to thank my crew, my sponsors, and all the fans who came out to see the best racers in off-road do battle. The champ is back!”