Once again the field of racers was stacked and the freshly prepped track was ready for a exciting weekend of racing at the Lucas Oil Off-Road Series rounds 5-6, held at the famous Las Vegas Motor Speedway. The stands swelled with fans to watch over twenty Pro-2’s come out and do battle on the newly built short course off-road track. Only the second race at the track, Las Vegas fans are beginning to realize they have one of the best off-road tracks in the world to complement the regional desert racing. Chances are if you grew up in Las Vegas you have participated in some sort of recreational off-roading.

Rodrigo Ampudia arrived at the track late Wednesday night not sure if his recent knee injury was going to prevent him from racing. While riding his Motocross bike, he crashed and hyper-extended his knee, pulling it out of its socket shredding his ACL, Meniscus, Lateral, Anterior, and PCL doing over 35 centimeters of nerve damage. After going through surgery Rodrigo was told he would be off his leg for 10 months and can not drive at all.

“I wasn’t sure if I could race at all, but I wanted to try. I felt like I owed it to my fans, my sponsors, and myself. We put my leg in a brace and modified my seat so I could drive with one foot. I normally use booth feet to gas and brake simultaneously and to stabilize myself. We went out to practice to see how it felt and it was ok. I was bouncing around a lot more and off every jump my leg would slam down, but it wasn’t causing to much pain,” stated the committed Rodrigo. 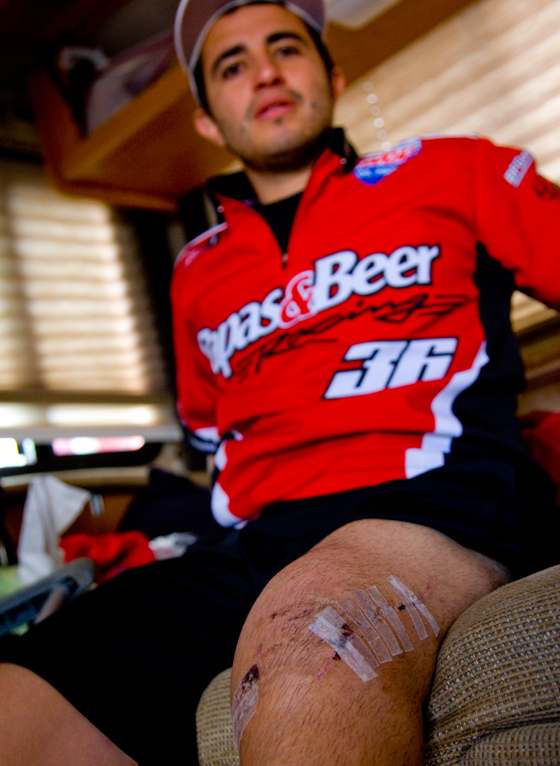 Rodrigo not only got around the track, but managed to qualify 6th in his number 36 Papas and Beer, Lucas Oil Pro-2. Putting him on the 3rd row for the start. Rodrigo steadily moved up in the field after the start and passed three vehicles to put him in 3rd place by the mandatory caution lap. After the re-start Rodrigo managed to maintain his position despite constant challenges from the field of trucks behind him. In a spectacular finish, Rodrigo floored it out of the last corner and caught and passed Todd Leduc in the air on the very last jump, narrowly edging him out to finish in second place!

“I was so stoked with my finish. I just tried to drive smooth and saw the opportunity to catch Todd at the finish and went for it”, stated Rodrigo. 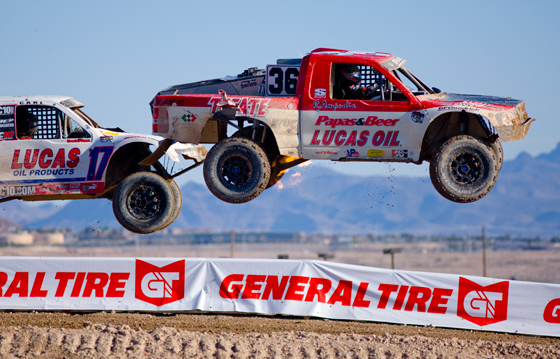 Sunday Rodrigo qualified 8th, starting him in the 4th row. Right off the start traffic had bunched up, and in turn three Jeff Ward Spun causing a traffic jam which put Rodrigo back to 11th. By the mandatory caution Rodrigo had managed to fight his way back up to 8th in the number 36 Papas and Beer, Lucas Oil Pro-2. Making a push in the last few laps Rodrigo managed to get up to 5th but made a mistake in turn one hitting Greg Adler while trying to pass on the inside. The result of the contact was a bent spindle making it almost completely impossible to steer the truck, which caused Rodrigo to fall back and finish 11th.

Rodrigo’s next race will be Lucas Oil Off-Road Round 7-8 at Miller Motorsports Park, Tooele, UT June 26-27