Mud Ridding in Louisiana with Highlifter

For years we have all seen photos of drunk sunburned rednecks standing around a mud pit cheering on their favorite driver with a beer in hand. To be frank, it looked about as interesting as Monster Trucks to me. But, after my bother Josh and Joey D. of UTVUnderground.com went to cover Mud Nationals for Polaris and reported back to me “It’s was a blast! It was not what we expected” I wanted to know more because I am curious about all different types of off-roading.

We got connected to the High Lifter crew who if you don’t know who they are then you should. They have been leading the evolution of mud culture for the past 18 years in ATVs and UTVs which many people have switched to from trucks because of the cost vs fun ratio. A little side note; as we attempted to fly into Shreveport, LA via United Airlines but were kicked off the final flight from Houston to Shreveport because we refused to check our pelican cases with lenses and cameras. The cases are specifically designed to fit in the overhead compartments and we had already placed two of the three cases without issue, but an over zealous flight attendant decided to boot one of my guys off the plane after he placed the case safely under a seat, so we all got off, rented two vehicles, loaded them up and drove four hours arriving in Shreveport around 2am. It’s unfortunate that the customer service on airlines has seemingly hit an all time low while prices have increased. We will not be divided or stopped. 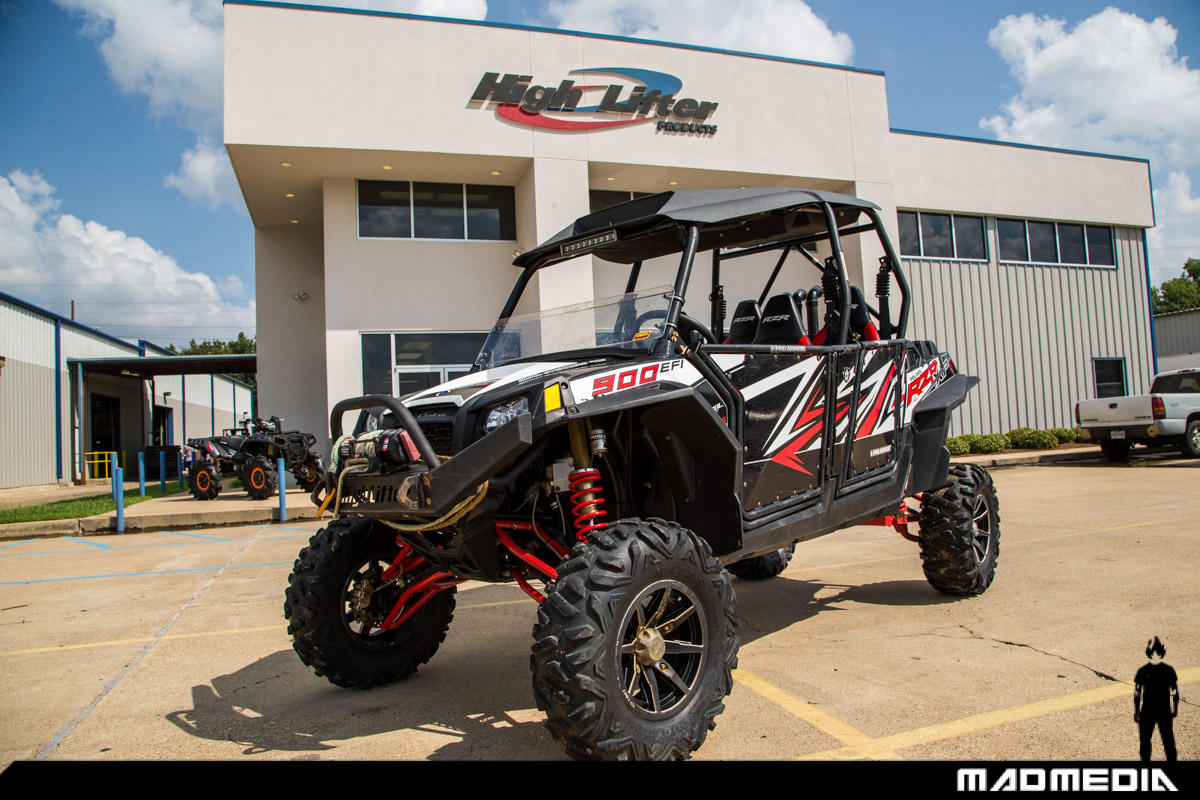 The next morning we got up and headed over to High Lifter’s 28,000 square foot shop where the pretty much do everything from design, manufacturing, shipping, and retail of some of the sports most popular muddin’ parts and accessories. They are literally the American dream, the father and son team of Mike and Scott Smith started from a backyard and grew into a multimillion dollar 35+ employee business. They didn’t stop there, they realized in order to share muddin’ with everybody they needed to create an event, the “Mud Nationals”, and then create a mud park, the “High Lifter Mud Park”. After meeting CEO of High Lifter Scott Smith and his staff we took a bunch of shots around his facility and then headed to his house.

Scott’s property is stunning! Tons of trails and mud for riding enveloped by pine trees and tons of rich green foliage. Smack in the center is a small lake stocked with fish of course. Some people put their money into their house but Scott put his money into his property. Surrounded by massive pines, Scott’s property has miles of trails and mud-holes. Scott was in the middle of building a new house with a massive garage and covered works area for vehicles. We sat and had beers watching the sunset as Scott’s right hand man Jesse Johnson prepped vehicles for the next days ride.

MUDDIN’ WITH HIGH LIFTER
I had no idea going five miles and hour was going to be so fun! Scott handed me and my crew “The Grey Ghost” which is so big it seems impossible that it started as a Polaris Ranger. I am still not sure exactly how it works, but it does. Scott kept telling me, “It’s all in the gearing!” so I went with it. I always have a hard time when we are filming.  I like to go hard, then again we have hundreds of thousands of dollars of gear with us so I have to take it easy. 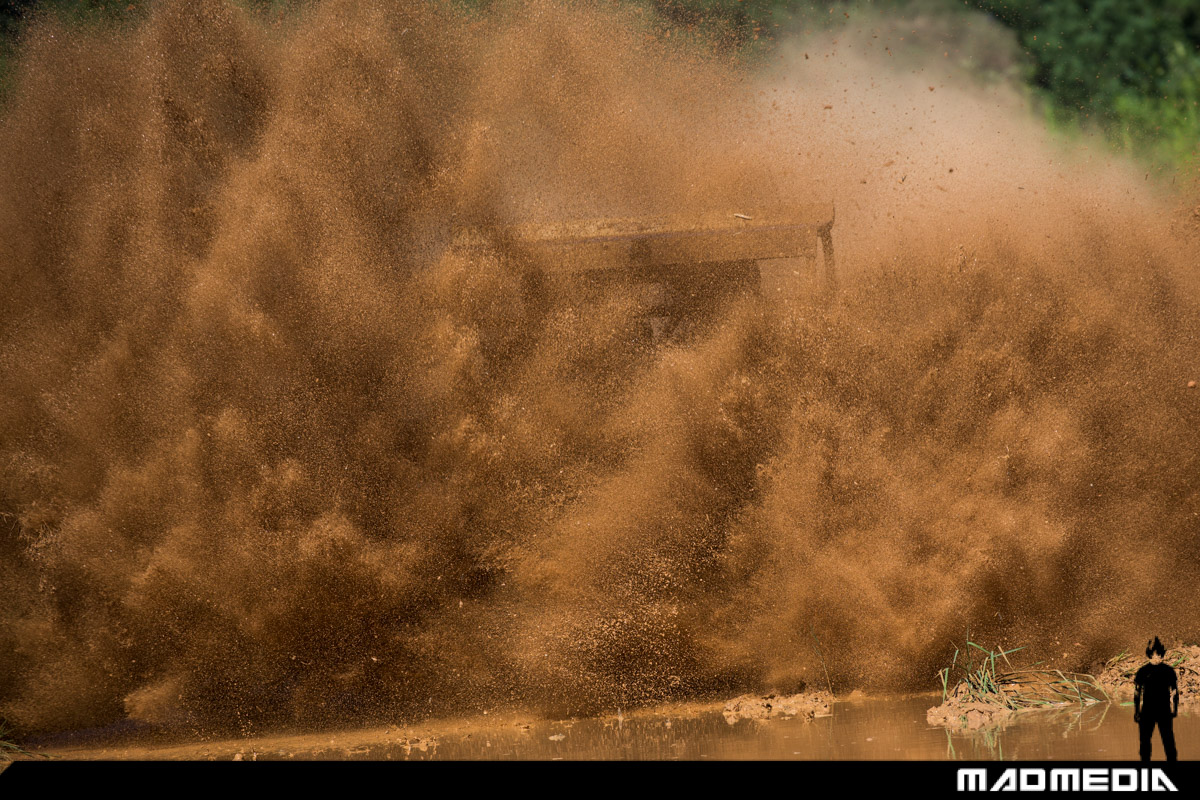 We cruised down his driveway and turned off onto a trail and went about 100 yards before encountering our first “Mud Hole” which was about three to four feet deep. Even though we were in the tallest vehicle I was still hesitant but Scott coached me through he said “Keep your momentum, go slow and you will be fine. “The Grey Ghost” slowly lurched though the mud-hole without issue. We kept going down the super tight trail periodically hitting deeper and longer mud holes and as we crept though each one I gained more and more confidence. After a session in massive mud-hole riding we headed back to Scott’s house and eventually back to our hotel. 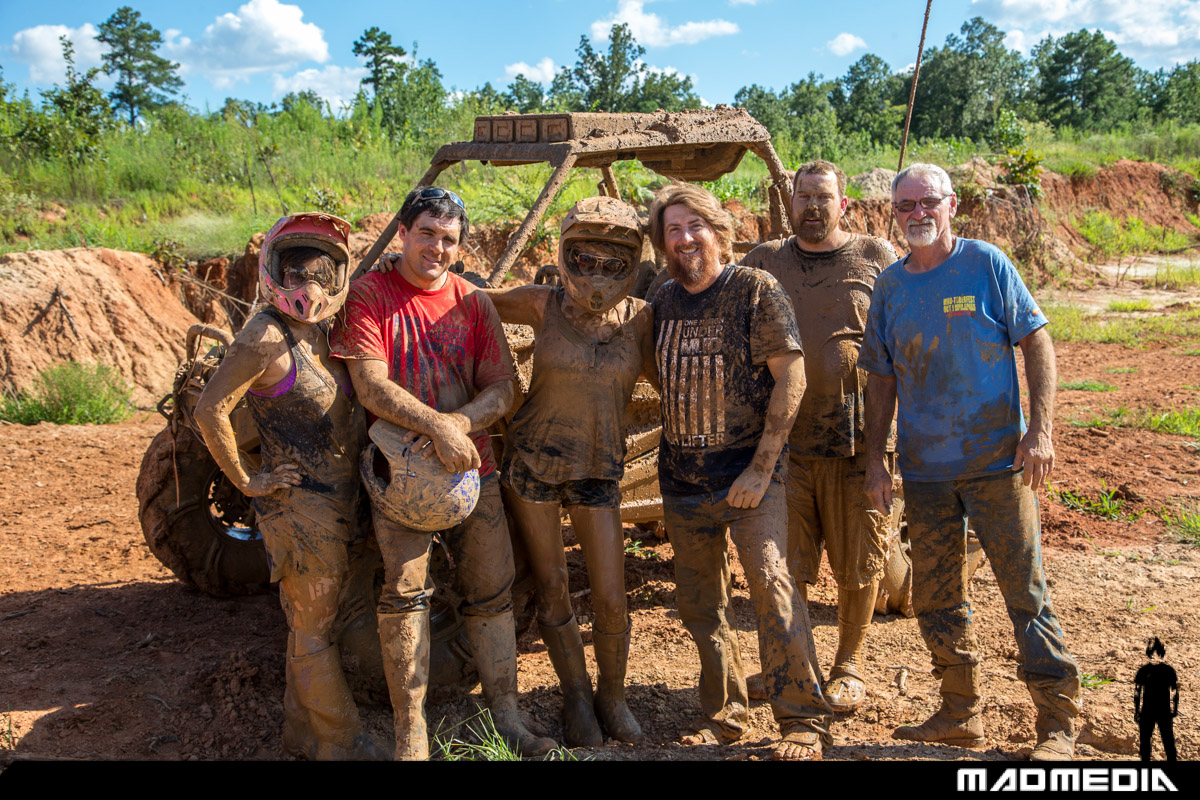 HIGH LIFTER PARK
Scott had put a message out to his extended crew (many of which work at High Lifter) to come out and ride at the High Lifter Park. Scott gathered up the crew and explained we were filming and to put on a good show. I really wasn’t sure what to expect, but man it was fun! We followed out the group of over twenty vehicles that were a combination between quads and UTVs. The High Lifter Park is an awesome mix of tight trials, open fields, medium mud holes and massive mud pits. It’s basically trail riding with periodic mud holes. I watched the lines the people ahead of me took and tried to somewhat emulate what they were doing. Every time you drop into a mud hole and feel the vehicle drop in three feet you get a little rush of adrenaline that makes you want to stomp on the gas, but you gotta control it and easy your way through slowly increasing your throttle. 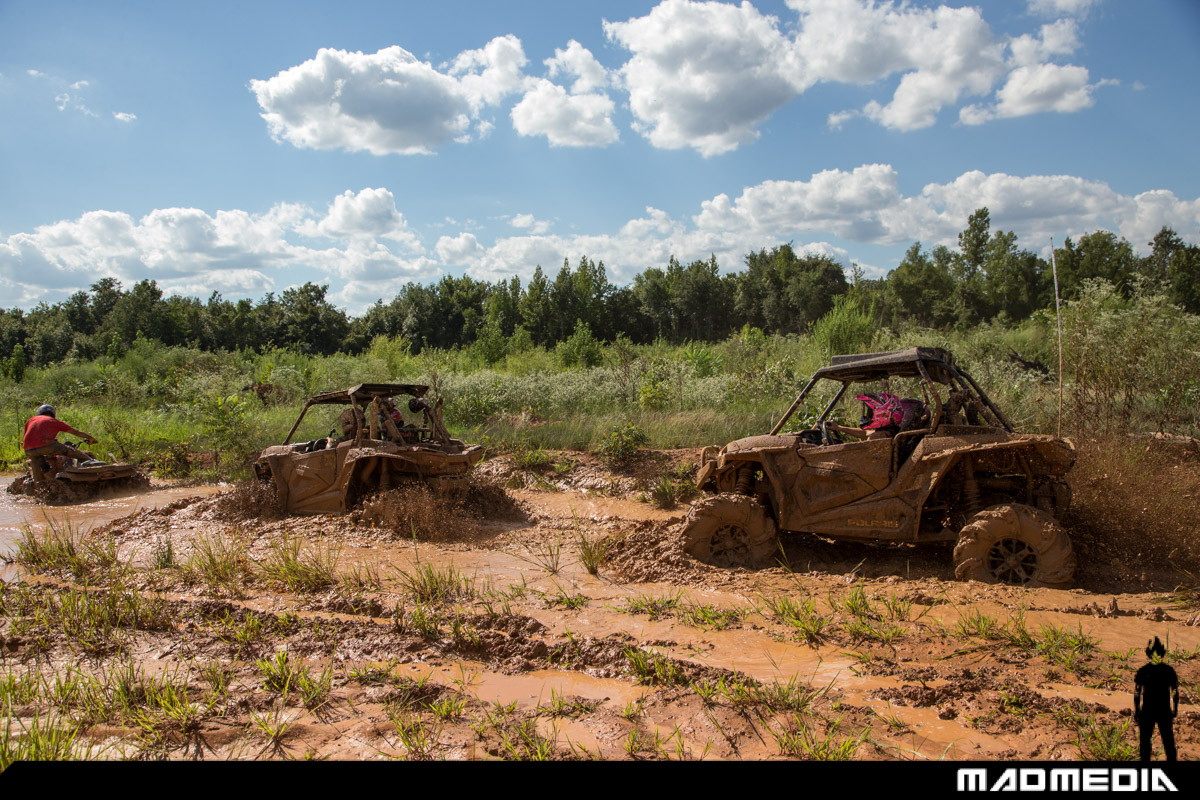 We came up to one particularly large and deep pit where there were already a few people stuck. Our group hopped out and helped pull em out then we crept through the massive pit one by one. When it was my turn I drove in and promptly got it stuck. When I climbed out to pull out my winch which was mounted on the front of the Polaris, I dropped into the cool mud up to my waste! After a little tug from the winch I got right though. It’s nice to have snorkels and sealed transfer cases, so no matter how deep you go with the car, as long as that snorkel is sticking out your engine will run. Maybe a little hot, but it will run. 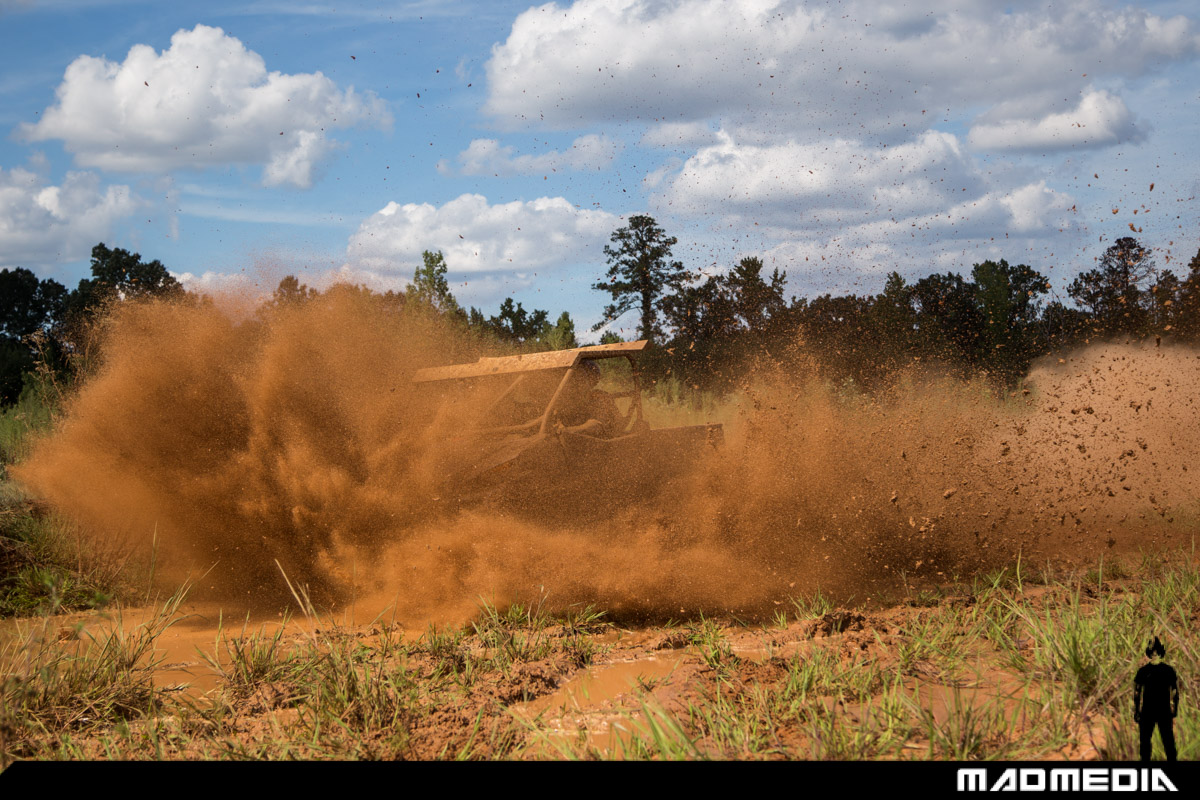 It’s was a little weird coming from desert racing where we try and avoid water and mud to be diving right into it, but after a few hours of ridding I definitely got it down. The group headed back to the start area for a quick lunch when it started raining, the end of the world type rain that Louisiana is famous for. If you look around and see how green and lush everything is, it’s not from irrigation, it’s because it rains here a lot! We loaded the cars back on the trailer and headed out totally drenched and covered in mud. 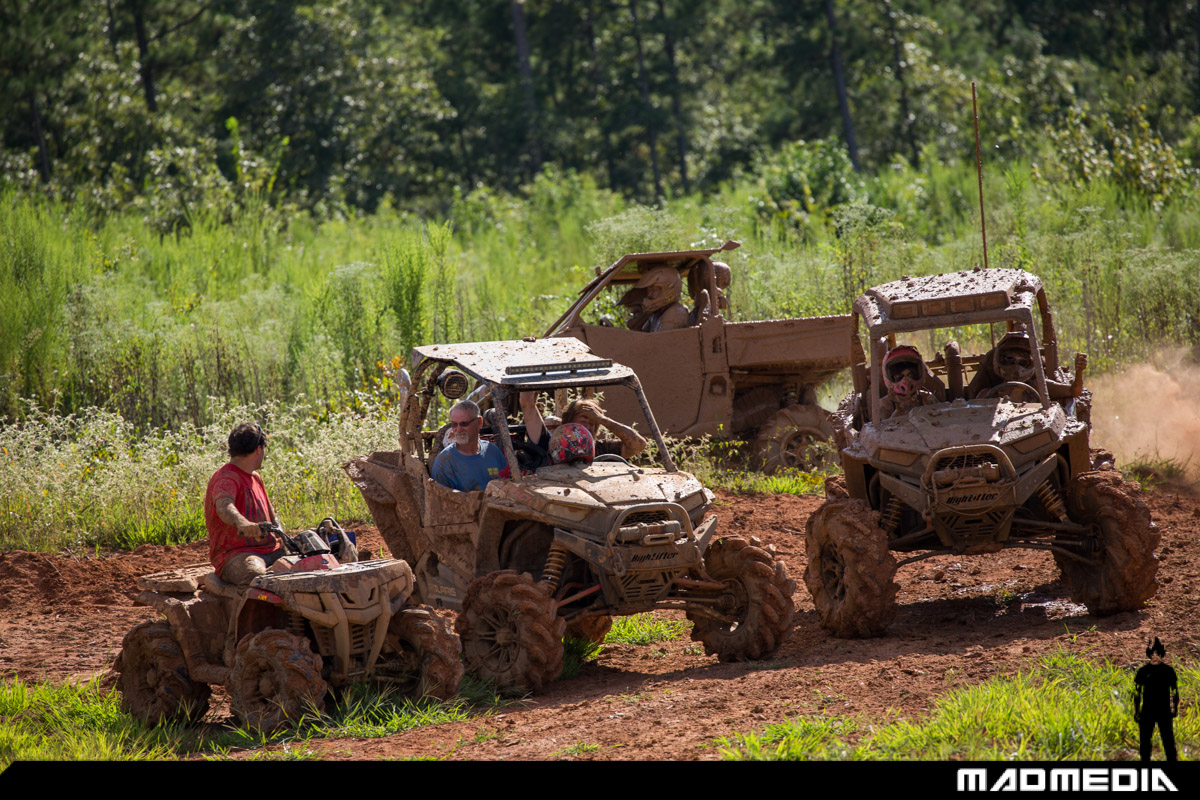 Mud ridding is definitely off-roading and it is fun as hell! Go muddin’ and you will meet great people, eat great food, and have a great time. There are hundreds of off-road parks in the south and all over America and I can’t wait to go check them all out! 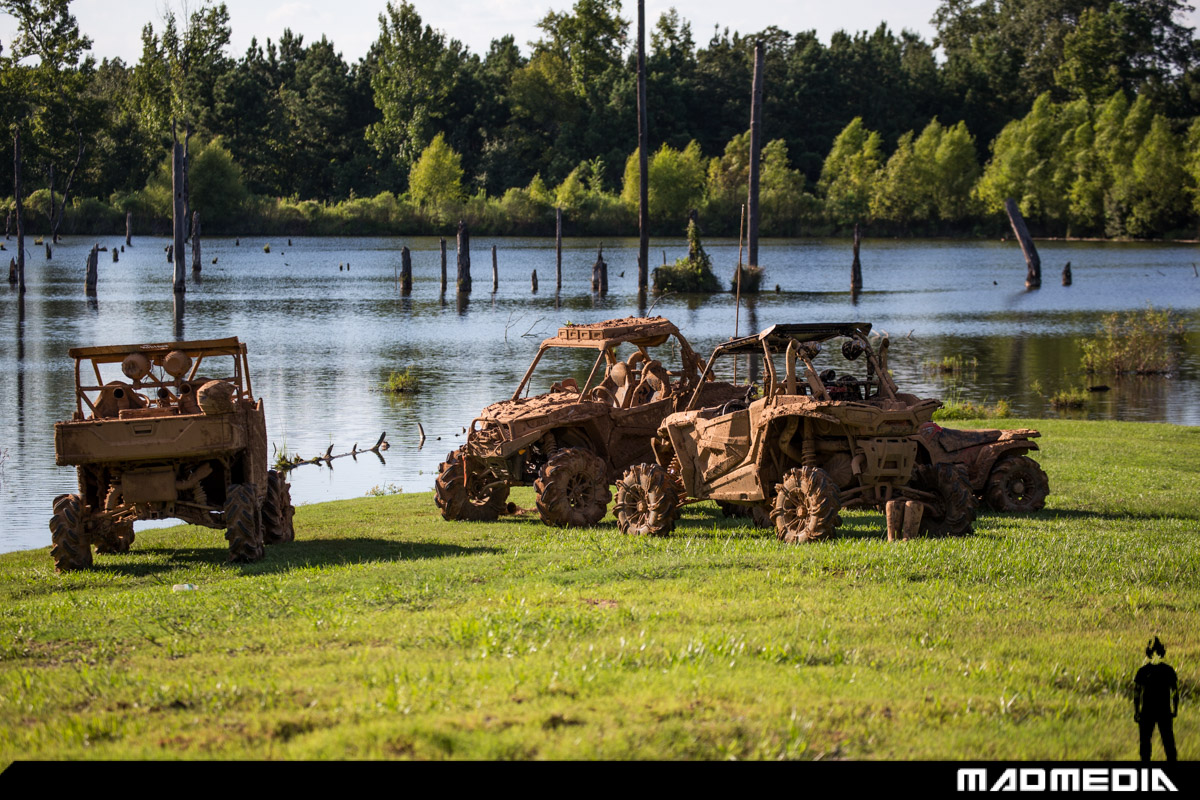 FOOD
Southern Louisiana is known for it’s food so I figured northern LA would be no different, and I was right. Pretty much from the minute we landed we were having great meals. Po Boys, Gumbo, Étouffée, Jambalaya, Muffuletta, and Red Beans and Rice were all apart of the menu, but we can’t forget the beignets. Ohh… the beignets you might as well staple them to your thighs but they are so damn good! For down home breakfast go to Strawn’s Eat shop. For Lunch check out Marilynn’s Place. The Po Boys are amazing and the seafood gumbo is a religious experience for your mouth. 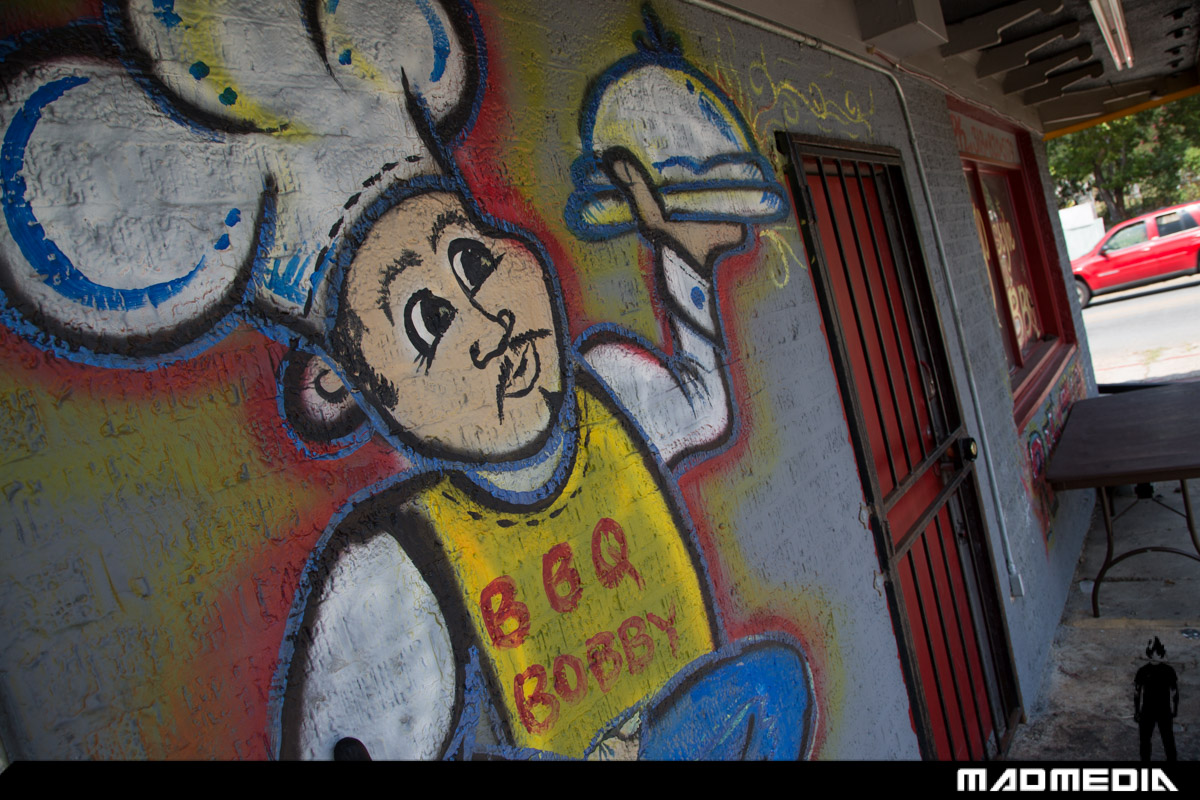 The food highlight of the trip was the BBQ at Scott’s house. These guys do not mess around. The BBQ started with crispy fried shrimp in a spicy southern style batter as well as frog legs, andouille and boudin sausage. Boudin sausage was new to me but it was delicious. We had Boudin Blanc made of pork and dirty rice stuffed into pork casings. 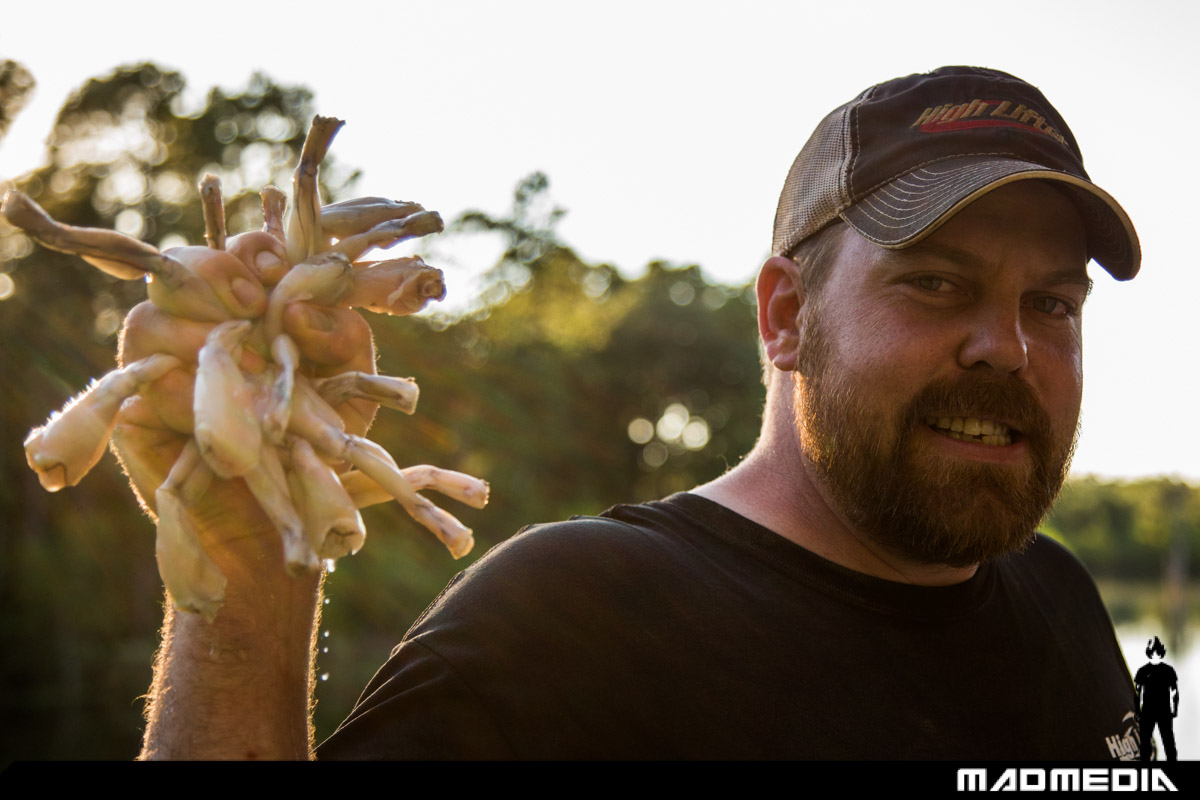 Turns out Scott’s right hand man Jesse Johnson is sort of a renaissance man, he can build and wheel a car as well as cook like a short order chef, and ladies, he is single! Then came the coolers full of crawfish, yeah I said coolers full of crawfish! The crawfish were freshly cooked and spicy. We ate and drank beer until it hurt.

We had a random home run hit after shooting all day we stopped at Monkhouse Seafood Diner, it was attached to a gas station on the way back to our hotel. I was skeptical but the food was outstanding! Massive chicken wings wrapped in that signature southern spicy crispy batter! Amazing! The shrimp po-boys were awesome to, plus they had Kool-Aid on tap! Sometimes you just have to get local! 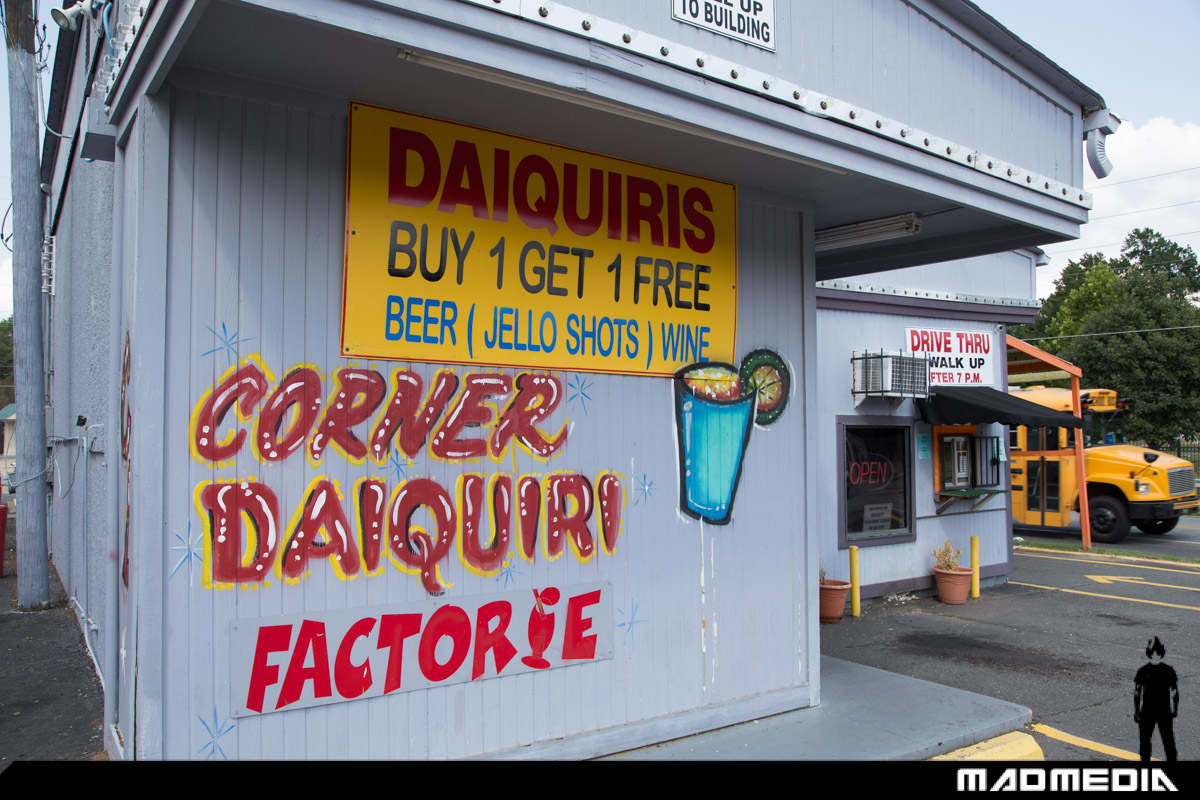 All of them are good and you can find them pretty much everywhere in Louisiana. If you know a local ask them if the know someone who makes muscadine wine, you gotta try it. It tastes like a light fruity wine with a little extra snap. Another feature of the region is the drive-thru daiquiri stands. Yeah no lie, you can dive through and get a daiquiri handed to you in your car. A piece of scotch tape across the top ensures that your do not drink it in your car, because that would be illegal. Brilliant. It’s nice to see some places in America are still a little bit free.