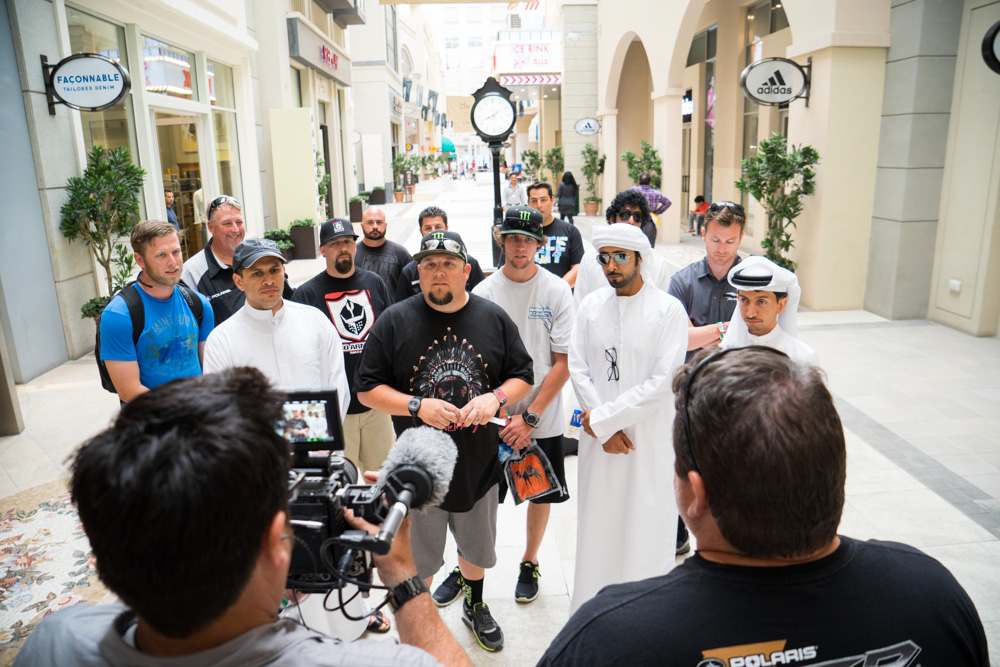 Mad Media filming in the streets of Dubai.

One of the coolest things about being an off-roader is traveling to other countries and experiencing culture that is literally off the beaten path. You get away from the tourist traps and quickly find out the true nature of a group of people and their culture. We were invited to Dubai to create content for Camp RZR UAE, a customer activation program Mad Media helped create with UTVunderground.com and Polaris at Glamis two years ago. 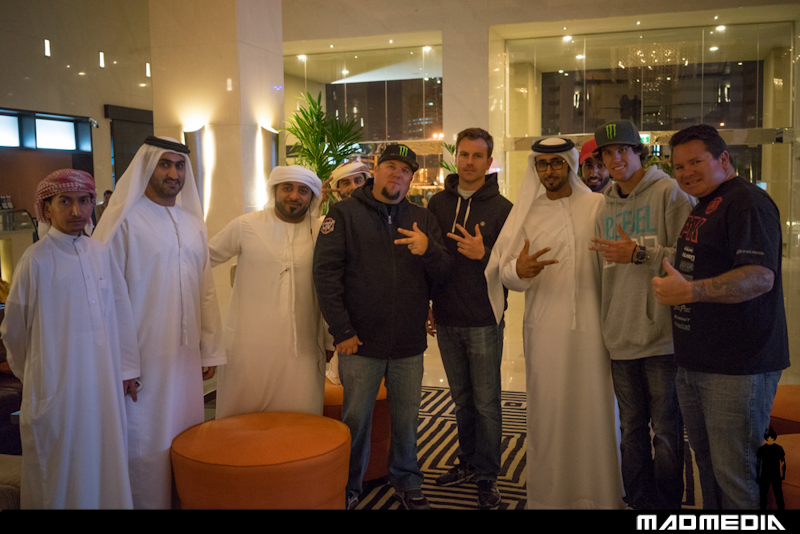 The “Boomer Team” is not a company or a race team, rather a group of guys all about shredding the dunes.

Upon arrival we were greeted by a UTV club called “Boomer Team” and there were honestly the most welcoming hosts I have ever experienced. The people of Dubai go out of their way to share their city and culture with the world. We dropped all of gear at our hotel and went straight to dinner with the “Boomer Team”. Dinner was amazing! It was kind of a sampling of the entire menu of the restaurant. One thing to point out is that Dubai boasts some of the most diverse culture of any city in the world. They have food influences from all over the world. In one meal we had, Greek, Arab, and Italian. After the sixteen hour flight, dinner was over as quickly as it started and it was time for bed and time to bash the dunes the following day.

The locals have quite a different driving style than us here in the United States. Instead of riding the dunes and slashing the lips the cross country the dunes, they focus more on speed and longer destination rides probably because they have more desert than us and we focus on style and rhythm. They can definitely drive well. We all had trouble staying with the leaders of the ride. The Al Badayer Dunes are located just outside of Dubai and feature lots of small to medium size dunes. The sand is less coarse then Glamis and is really compact. 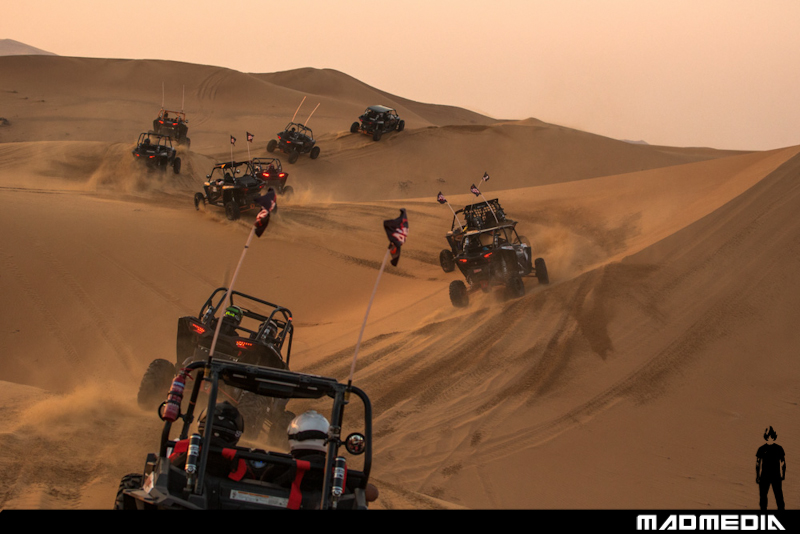 Instead of riding the dunes and slashing the lips, the locals focus more on speed and longer destination rides.

You can slide your car a lot more without fear of hooking and edge. It was weird sensation to get accustomed to but after a few hours of riding we got used to it. During the duning season (October to March) the locals create temporary camps that stay in place called “Ezbas”. They can be as simple as a traditional tent with carpeting laid down or crazy tile laden palaces with all the amenities of a home. One thing is for certain, there is a bit of competition among the various groups as to who has the best “Ezba”. So basically rather than dragging cars, RV’s and equipment out for each trip the dunes they set it up once for the season and break it down once when the season is over. 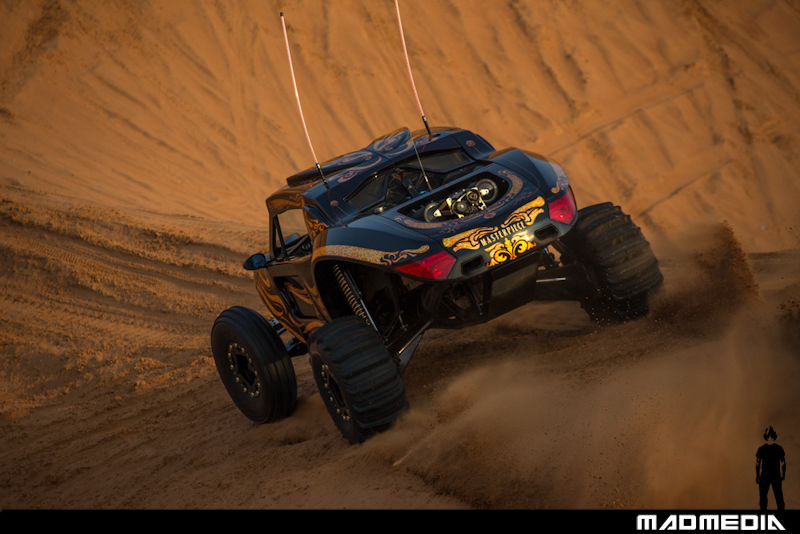 The vehicles we saw in Dubai were ridiculous.  This “Masterpiece” was by far our favorite sand rail in the Al Badayer Dunes.

We drove out to a hill called “Buggy Hill” where locals charged the hill in a variety of vehicles from UTV’s to bikes to custom sand rails. It was a lot like Oldsmobile Hill in Glamis but a lot smaller. Probably the biggest difference was the massive amount of four-wheel drive SUV’s out charging the sand. The preferred vehicle seemed to be the Nissan Patrol and locals seemed undeterred by the fact that they were driving a street vehicle in the sand. They also offer dune rides to tourists that look hilariously terrifying.

The regional food is amazing and consists of drastically different spices, flavors and textures than we have here in the United States. I wanted to try more but we were only in town for week. The first night we arrived we had an amazing dinner at 2am. It was served family or “Tapas” style so everybody could try a little bit of everything. The meal started with appetizers of hummus, baba ghanoush, two different styles of calamari, grilled halloumi, pita bread, raqaq bread, khameer bread, chebab bread, goat cheese, chicken shawarma, kibbee, fatayer and kabsa. 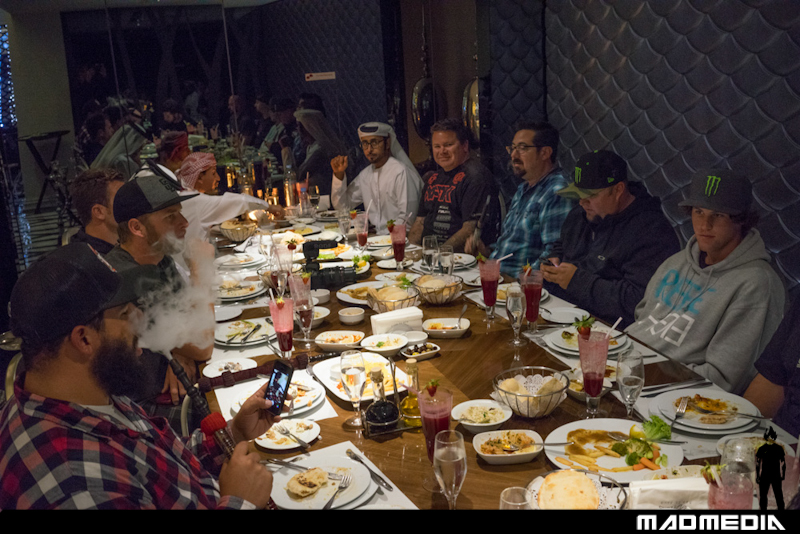 Everything was delicious and we all ate until we couldn’t eat anymore. Saffron, cardamom, turmeric, and thyme are the core flavors used in Emirati dishes. It was quite a different and refreshing range of flavors than what we are used to. We were also immediately introduced to a variety of teas and coffees including karak tea, emerati or Red Tea, Turkish coffee, and gahwah or Arabic coffee. Shisha from Hookah’s was served along with dinner adding yet another layer of interesting flavors to the outstanding meal. 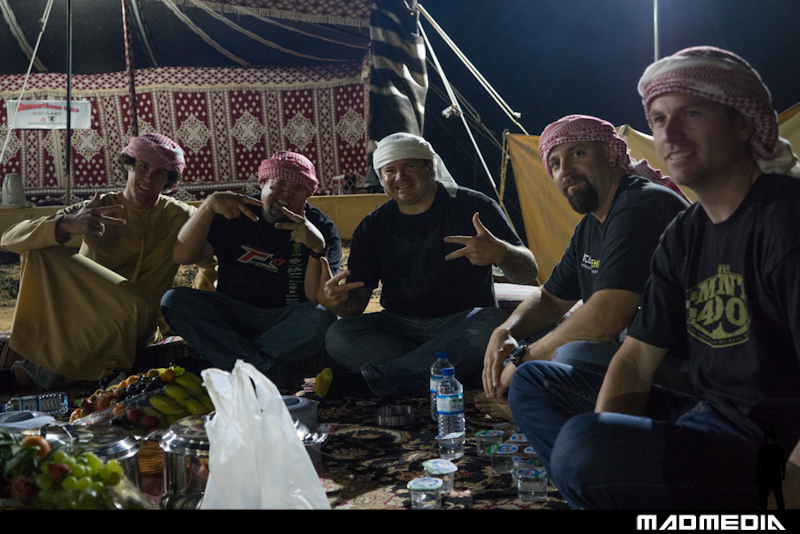 The “Boomer Team” invited us to a traditional meal in their “Ezba”.

Dates were served with every meal and were made available in the lobby of the hotels along with gahwah. Even breakfast in the hotel was cultural experience mixing Western, Middle East, and Asian into an orgy of flavors. Dubai has become a cultural hub of the world, adapting all styles of food as acceptable. I think the only type of food I didn’t see well represented was Mexican/South American and I am sure the “Boomer Team” could have made that happen as well. No matter where I have traveled in the world, the best meals have always had have been with locals. Our hosts the “Boomer Team” invited us to a traditional meal at their “Ezba”. 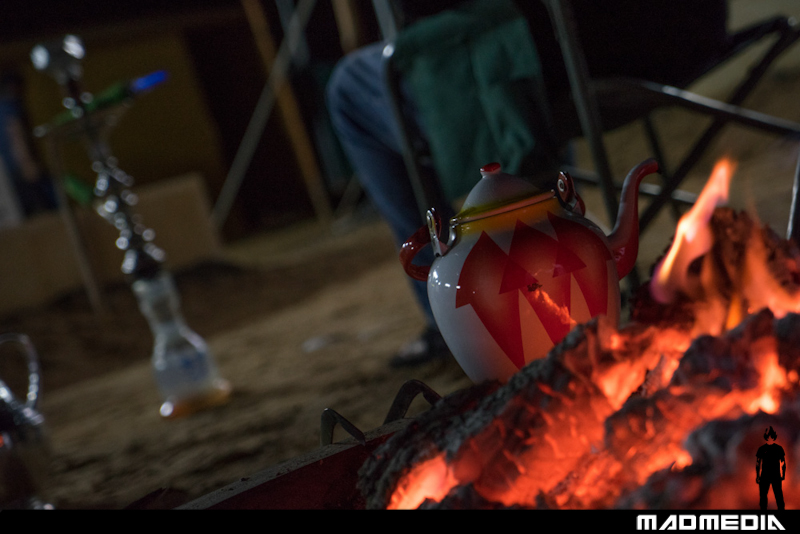 Our meal began with Karak, a flavored tea made by brewing black tea with a mixture of aromatic spices and herbs.

The meal started with dates, Karak Tea, and a variety of fruit. When the massive main dishes came out we were blown away by the scale of the presentation. One platter would have been enough for all of us but our hosts wanted to share three distinct styles of lamb. Baryani, Machbūs and Mashwee were the three different dishes of lamb we were served with side dishes of Logaymat, Balaleet and Aseeda. We dug in with our right hands tearing pieces of lamb off the bone combining it with rice into a ball for each bite. The Machbūs style with lamb was served on long grain rice spiced with black pepper, cloves, cardamom, saffron, cinnamon, black lime, bay leaves and nutmeg. It was amazing.

THE CITY OF DUBAI 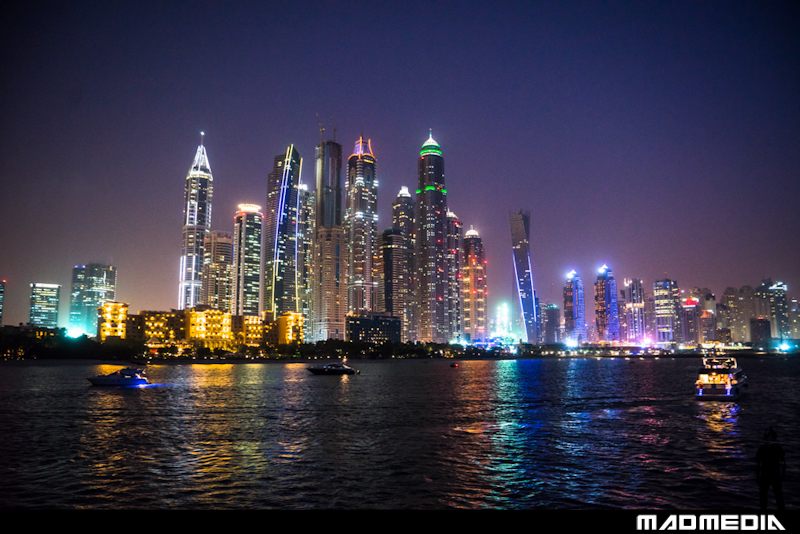 The Dubai skyline was one of the most breathtaking sights we’ve seen on our travels.

Dubai is the most advanced city in the world in many ways. Everything is the world’s best or world’s biggest. Experiencing the city is worth making the sixteen-hour flight, especially if you are an architecture buff like me. From the Burj Khalifa, “The World’s tallest Building”, to the Burj Al Arab, “The World’s most Luxurious Hotel”, the structures in this city are simply amazing. Oh and let’s not forget the man made Palm Islands which are a combination of architecture and engineering. 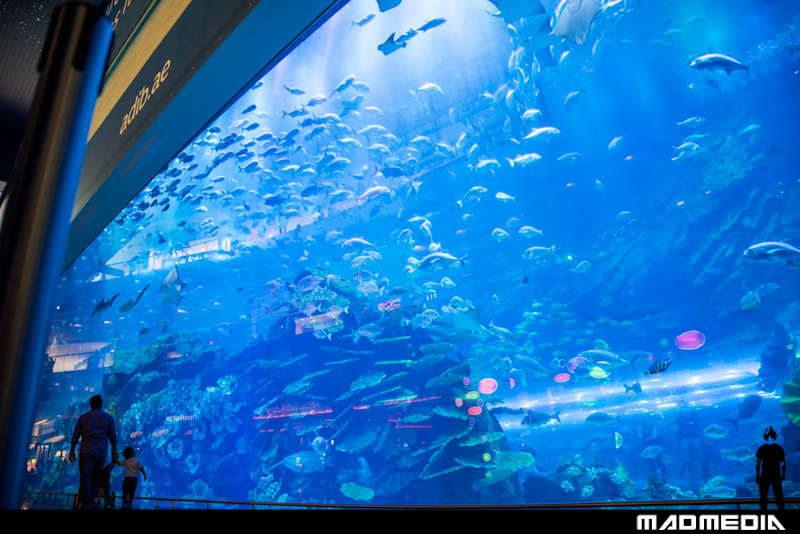 The Aquarium and Discovery Centre in the Dubai Mall was developed and operated by Oceanis Australia Group and is one of the worlds largest aquariums.

Dubai is also know as the shopping capital of the Middle East with tons of malls, including the world’s largest shopping center, The Dubai Mall. We spent a couple of hours checking out the Dubai Mall, which was incredible. From the massive aquarium, to the indoor ice rink, to the actual dinosaur skeleton display, The Dubai Mall is more than just a place to shop. It’s practically its own indoor city! We also visited the Dubai Gold Souk, known as the city of Gold. The Gold Souk is located in the heart of Dubai’s commercial business district in Deira and consists of hundreds of retailers, mostly jewelers. There are some clothing and other various retailers but the real draw is the narrow lanes lined with massive amounts of gold jewelry. It’s easy to get lost in Dubai, as there is so constant construction many of the new roads are not yet on GPS, so figure out your main freeways and landmarks to help with basic navigation.

The people of Dubai are extremely hospitable and accommodating. They have beautiful and rich culture that has many different layers of complexities. The underlying theme from all people in the area was they wanted to make sure Americans didn’t perceive them as extremist or terrorists. Islam is the official state religion, but anyone caught preaching racial or religious hatred or caught promoting Islamic extremism is usually jailed and deported. 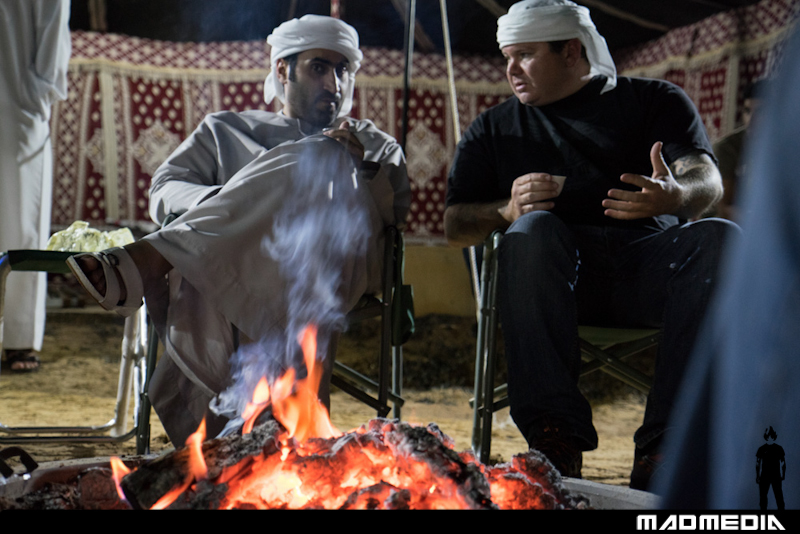 Dubai boasts some of the most diverse culture of any city in the world.

Dubai also has large Christian, Hindu, Sikh, Bahá’í, Buddhist and other religious communities residing in the city. Although there are laws that are different form the united states, such as alcohol being restricted to bars, I never felt like we were being oppressed, rather is was just simply a rule of being in that country.

The culture of off-road is alive and well in Dubai and I can’t wait to go back and continue to learn more about Arabic culture through the common language of off-roading. 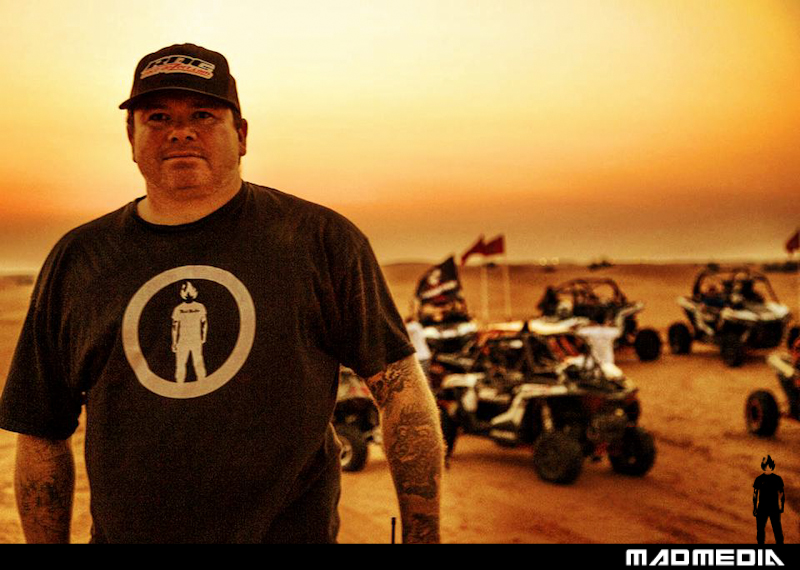 I am the off-road traveler. – Matt Martelli

Off-Road traveler Lesson #1
Always travel with you own IMPACT helmet as most countries don’t have “Viking” size helmets.

Off-Road traveler Lesson #2
Always travel with you own GPS unit. If you get lost it’s because you aren’t prepared.