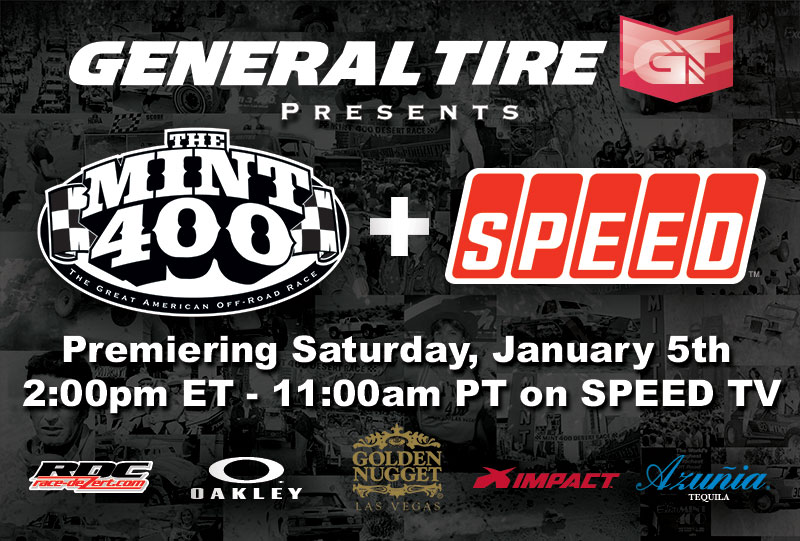 The 2012 General Tire Mint 400 was an epic battle between some of the top off-road racers in the world, spanning twenty-five different classes of vehicles from fourteen different countries. The race was captured in stunning HD resolution by Mad Media, the largest, most experienced film production crew in off-road. The Mint 400 television show features breathtaking cinematography, filmed in some of the most remote and challenging spots on the racecourse, as well as from a TwinStar helicopter, outfit with a custom Cineflex camera system – designed for grabbing steady shots of the 1000+ horsepower trophy trucks as they rocket through the Nevada desert. The bumper-to-bumper race action of the one-hour show is mixed with all of the world famous Mint 400 festivities, shot in Las Vegas…making it the most watched off-road show on TV!

SPEED TV will be re-airing the show multiple times throughout the year. A complete schedule will be announced and posted on The Mint 400 Facebook page and website: facebook.com/themint400 / www.themint400.com.

About the Mint 400:
The General Tire Mint 400 is the oldest, roughest, most spectacular off-road race in North America! It was started in 1967, and is steeped in American lore, as thousands of racers as well as celebrities from around the world have attempted to tame the brutal Nevada desert. With over 300 race teams, 20 classes of vehicles, and more than 20 thousand spectators…The Mint 400 is currently the biggest off-road race in the world! Now owned by The Martelli Brothers, The Mint 400 is part of the Best in The Desert Off-Road Championship.