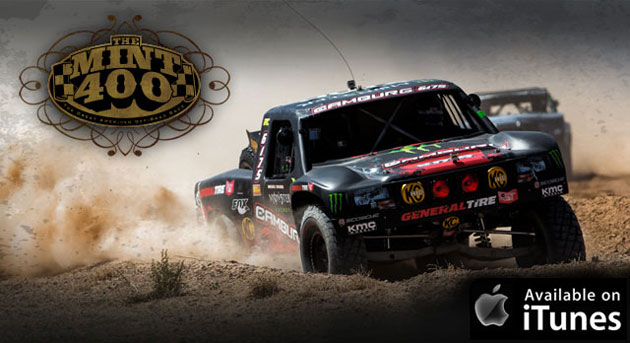 The 2013 General Tire Mint 400, presented by Polaris – is now available to rent or purchase through Apple iTunes. The special two-hour digital version of the primetime television show captures the most dynamic and thrilling off-road racing on the planet – at the most prestigious and challenging off-road race in America. 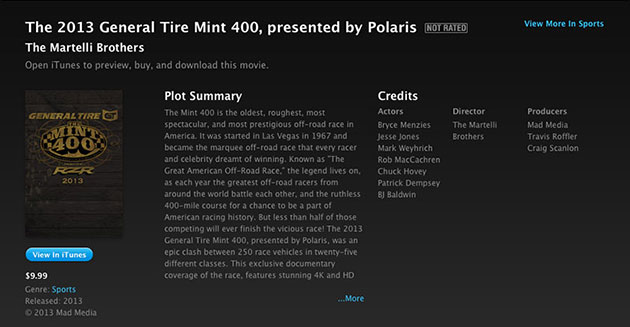 Directed by The Martelli Brothers, and produced by Mad Media, The Mint 400 has become THE premiere off-road racing television and film event of the year. The legendary race is shot in stunning 4K resolution and produced annually by Mad Media at their San Diego headquarters. The show is broadcast on SPEED Channel to over 78 million homes, simulcast online to millions more, then made available for digital download on iTunes, Amazon, Xbox, and the PlayStation network. Coverage of the annual historic race is sold on DVD as well, making The Mint 400 the most watched off-road race program in North America.
“The Mint 400 is a thrilling show to watch – for people any age”, commented Joshua Martelli, co-owner of The Mint 400 race. “But it’s also become a lighting rod for our sport. Essentially we’re promoting the entire off-road industry, bringing attention to how awesome desert off-road racing is at The Mint, supporting our partners at Best in the Desert, and pulling in thousands of racers and off-road race fans to Las Vegas for our event. Our annual iTunes release is just one way that we are reaching our audience – and it’s a very important one.”
This year, over 250 race teams battled the brutal four hundred mile Mint 400 desert racecourse. The competition was fierce and full of drama, suspense, and back and forth clashes in all twenty classes of vehicles – from the fast growing Pro UTV Class, all the way up to the million dollar Unlimited Trophy Trucks. The overall lead changed seven times, and less than half of the competitors finished the destructive and punishing race.
News