It all started with Ivan “Ironman” Stewart’s “Super Off Road” video game. Then the NBC broadcast coverage of the longest North American off-road race, the Baja 1000. When a family friend named Michael Gaughn took BJ for a ride in a VW-powered two-seater Chenowith, he was absolutely hooked. “I remember thinking how awesome that car was. It was the coolest thing I had ever done. I couldn’t believe the stuff it was capable of. I wanted to start racing immediately,” said BJ. After watching the Chenowith Terrible’s 250 his sister Staci bought him the car. He entered the SCORE championship race series and placed 6th at the SCORE Primm race that year, and later won the “Baja in Havasu” race.

BJ soon outgrew the Chenowith and bought a Toyota powered Bunderson 10 car, which he later modified into a Class 1 car by rebuilding the back of the car by outfitting it with a 375hp Scat V-4 motor. After placing 3rd and 4th in a few races and working the bugs out, he won the Buffalo Bills 400 race. In 2003 BJ moved up to the ultimate open class…Trophy Truck. He bought a mid-engine Porter Trophy Truck from Damien Jeffries and entered in the Primm 300, a mere six years after his first race at the same event.

The 2003 Baja 1000 would prove to be an important milestone in BJ’s off-road racing career. After leading the race for hours a spectator threw a large boulder through his window at high speed. It struck his co-rider in the helmet breaking his jaw and cutting his chin. After getting brief medical attention they went on to finish 5th. That year BJ forged a friendship with off-road racing legend Larry Ragland, which propelled his driving career even further. “Larry can do things in a truck that don’t seem possible. I’ve been a fan of his since I was 15. The first time I went pre-running with him it was at the 2003 Baja 500 on the Trinidad crossover road. We had a nice pace for a while but he must have got bored. Larry decided to pick up the pace a lot. I guess he wanted to have a little fun. I was gnashing my teeth and pretty stressed for about 10 minutes. The cliffs were freaking me out. It seemed physically impossible that he could change direction that fast in a truck. I was really blown away. He’s definitely been a mentor to me and I have learned a lot from him.”

Larry taught BJ how to travel fast off-road without breaking the vehicle, and how to set up and carry speed through corners, linking them together to race fast and smooth. BJ put the techniques to use right away, finishing 2nd at the Best in The Desert Vegas to Reno race. At the same time BJ began improving his health by training boxing and grappling. “I didn’t ever want to get tired while I was driving. If you are out of shape you make more mistakes due to fatigue. I don’t know if it is the competitive nature in me or because I am a naturally aggressive person, but I love Jiu-jitsu. It helps build functional strength. Jiu-jitsu is very technical. It’s a lot like driving; your mind and body have to work together. When everything works together I feel unstoppable.” 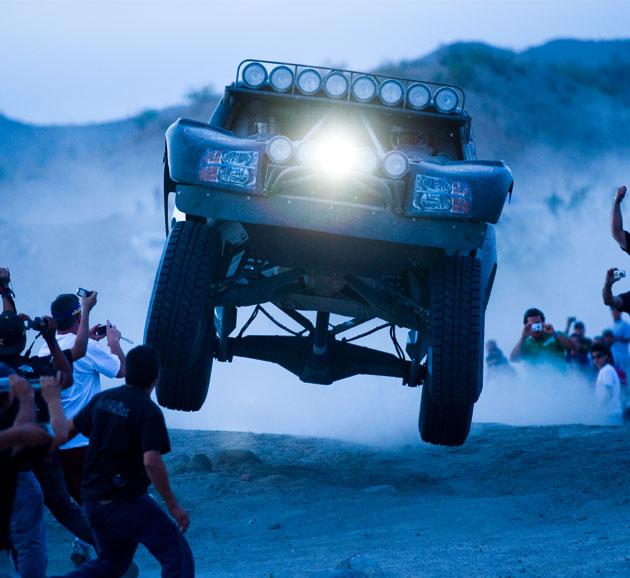 After racing a few years in the mid engine Porter truck BJ ordered a new SPD Trophy Truck. The SPD truck was more reliable and easier to maintain. It had an immediate effect as BJ won the 2006 SCORE Laughlin Desert Challenge. He had taken delivery of his new truck “Rampage” only a couple of days before the race, leaving little time to test or make shock adjustments. BJ raced the SCORE San Felipe 250 shortly after and finished 2nd place overall. The rest of the 2006 season saw BJ rack up multiple top ten finishes including 5th at the Baja 500 and 2nd at the Baja 1000. The effort was enough to win him the 2006 SCORE Championship.

In 2007 BJ was back at it again, winning the SCORE Laughlin Desert Challenge for the second time. In thirteen years of the Laughlin Desert Challenge he is the only person to win it overall two consecutive years in a row. He went on to win the Best in the Desert Vegas to Reno race and finished 3rd at the SCORE Baja 500 after a hard fought battle with his mentor “Lightning Larry Ragland”.

BJ is currently campaigning his Trophy Truck in the SCORE and Best in The Desert championship series. He has set his sights firmly on short course as well, preparing to take delivery of his first Pro 2 truck shortly. BJ has been impressed with the North America rally championship, Rally America, and is planning to test this spring at Team O’Neil’s Rally School. “Honestly I can’t get enough of racing. I love competing and I love winning!”