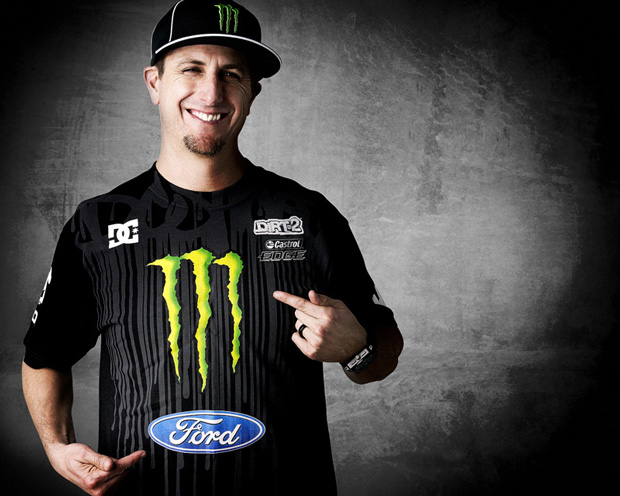 January 6, 2010—Brooklyn, NY—Ken Block is off to race in the FIA 2010 World Rally Championship as part of the newly formed Monster World Rally Team. Block will continue to compete in the Rally America national series, as well as in X-Games XVI. And he’s doing it all in a Ford!

Block’s entry into the WRC is history in the making. He will be the first American to campaign the world stages as part of a multi-year program. In 2010, Block will compete in select rounds of the championship with an emphasis on developing his ability for a successful future in the WRC. “Racing in the World Rally Championship has always been a dream of mine but I’d still be dreaming if I promised podiums in the near future,” says Block. “I will be going head-to head with the greatest drivers on the planet. And sure, I will be giving it my all but my main objective for 2010 is to develop into a competitive driver for 2011 and beyond.”

The Monster World Rally Team developed as a result of Ken Block’s relationship with the energy drink company. “A radically extreme form of motorsport with supremely talented drivers who compete on gravel, asphalt, snow and ice really mirrors everything we are about,” says Monster Energy President Mark Hall. “For that reason Monster Energy is pleased to join Ken Block in the formation of the Monster Energy World Rally Team. Not only is Ken a cult hero to our consumers through his gymkhana videos and other stunts, the fact that he will be the first American racer to compete in the 38-year history of the World Rally Championship is truly impressive. Factoring in that Ken will be chasing the 2010 Rally America Championship Series, a Gold Medal at X Games XVI while continuing to scheme-up new videos and mind-altering stunts, Monster couldn’t have a finer ambassador in our new venture into rally.”

In a partnership with Monster Energy, the team is also bolstered by Ford—a brand Block feels at home in. “I am stoked to be rallying in a Ford,” says Block. “They are an impressive force in the sport. From the days of the 1970s Escorts to the Group B RS200, to the modern-day Focus and now the Fiesta, Ford has an excellent history within rally. I couldn’t be happier to be part of this amazing heritage. Not to mention my dad would be proud. He was a true Ford guy.”

For the WRC, Block will be racing in a Focus RS prepared by M-Sport, the company responsible for handling all of Ford’s World Rally efforts. M-Sport’s Managing Director, Malcolm Wilson, who played a large role in ushering Block into the WRC, had this to say: “It is great news that Ken will be joining the WRC and even better that it will be with Ford! Ken has been instrumental in elevating the public awareness of rallying throughout the world with his multimedia exploits, particularly in the U.S. which is a key global market and an area where WRC has yet to reach its full potential. Ken’s appearance in the WRC and his desire to compete toe-to-toe at the highest level is indicative of the determination and drive that he has exhibited in all areas of his life to date—be it in business or personal targets. Ken is a colorful character with a huge international fan base and his decision to appear in the WRC is warmly welcomed.”

In the United States, Ken will be racing both the Rally America Championship and X Games in the all-new Ford Fiesta, prepared by Olsbergs MSE. “We are excited to partner with Ken as we launch the Ford Fiesta in the United States in 2010 and showcase the Fiesta’s performance and fun-to-drive capabilities,” says Jamie Allison, Director of Ford North America Motorsports. “Rally racing has always played a key role in the global motorsports strategy for Ford Motor Company.”

In addition, the skateboard footwear company Block co-founded, DC Shoes, will also support the team, along with the popular video game title, Dirt2, in which Block had a starring role. Castrol Edge is providing support for the team as well.

More news about the team and a detailed schedule of races and events will be available soon at monsterworldrallyteam.com. For now, head on over to the site for an interactive version of this press release and the premiere of the Monster World Rally Team Launch commercial.

About Ken Block:
Ken Block’s rally career began in 2005. His skill and car control became quickly apparent and Block aptly nabbed Rookie of the Year in the Rally America Championship. Since then, Block has continued to race in the series, boasting a healthy number of podium appearances, as well as X Games medals. In addition to his performance in the car, Block has been a driving force in shedding light on the sport within the United States. Block co-founded DC Shoes, a worldwide leader in performance skateboarding shoes and a renowned action sports brand. His keen branding and marketing acumen not only elevated DC to their current eminent status, but has allowed Block to achieve global fame as a national rally driver through his wildly successful viral video campaigns. Ad Age named his “Gymkhana TWO” the No. 4 Viral Video of 2009.

About Monster World Rally Team:
Created and assembled by Ken Block, the object of the Monster World Rally Team is to redefine the race-team archetype. The team is driven not only to win, but to also market motorsport through innovative, creative and interactive ways. The goal: To become the best known team in the WRC and bring rally to the masses along the way.