The field of racers were stacked, the newly built track was prepped, and the stage was set for a great weekend of racing at the Lucas Oil Off-road season opener in Las Vegas. Rodrigo Ampudia and his team headed to the Las Vegas Motor speedway from their shop in Ensenada, Baja California prepared to battle for podiums in both the Pro-2 and Pro-lite class. Tension swelled as the vehicle counts began to climb to record numbers in all classes. The stage was set for an epic weekend of off-road racing at the Lucus Oil Off-road series season opener at the world famous Las Vegas Motor speedway.

Rodrigo quickly found his rhythm qualifying first in pro-lite and 3rd in Pro-2. The first race on Saturday for Rodrigo would be the racers class of Pro-lite. Rodrigo started in the 2nd row back and started gaining positions off the start. Unfortunately the race had to be restarted because of an immediate crash temporarily slowing the momentum. After the restart Rodrigo got tangled up with Metal Mulisha General Brian Deegan, which bent his front right rotor and damaged his tire. Rodrigo managed to weld the damaged truck with finesse to a 4th place finish in Pro-lite. 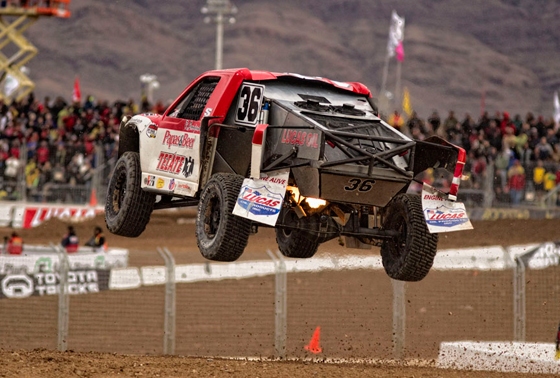 Saturday also brought a heated battle for podiums in the Pro-2 division. With 28 trucks and many of them long time race veterans, Rodrigo would have his work cut out for him as traffic would be a major factor. Due to the inversion Rodrigo started on the outside of pole next to Ricky Johnson, which should have kept him out of the carnage, but McGrath tangled up with him and several cars got around him. Rodrigo got right back into the action and fought his way back up to 5th by the midway caution. From there Rodrigo battled back in forth with Bryce Menzies and Jeff Kincaid ultimately finishing third right behind off-road legends Rob MacCachren and Ricky Johnson.

Sunday would also prove to be challenging as practice and qualifying were canceled due to rain. In the Pro-lite class Rodrigo started in the 2nd row. The race quickly turned into a battle as off-road veteran Marty Hart took the lead and set a blistering pace. Rodrigo managed to stay in the front group of trucks avoiding much of the carnage in the back. By the Mandatory caution Rodrigo had fought his way to the front, and maintained the lead until the checkered flag finishing first in Pro-lite class.

In the Pro-2 class, after the inversion Rodrigo would start on the pole next to Robby Woods. At the drop of the flag Rodrigo went after the first spot until Woods rolled violently in turn one. The race was restarted with Rodrigo on the pole, he maintained the lead for the first few laps until Rob “Fig” Naughton got around him. Once behind Naughton, Rodrigo fell back to 4th, but fought his way around Naughton, ultimately finishing third in the Pro-2 class. In addition Rodrigo was also able to run the fastest lap of the day. Rodrigo Ampudia is off to an Impressive start, capturing three podiums, more than any other driver in the series. 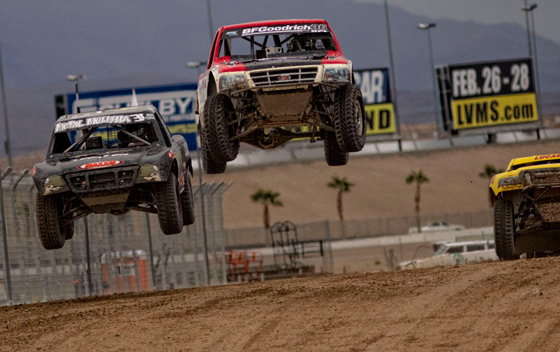 “It’s great to be racing against the best drivers in the world and get on podium. It’s validation for all the hard work me, my team, and my family have put into off-road racing. We love this sport! Thanks to all my sponsors Lucas Oil, Papas & Beer, Tecate, BFGoodrich, and the fans.  This is going to be a great year of racing!” Rodrigo commented about the great weekend of racing.

Rodrigo’s next race will be Lucas Oil Off-Road Round 2-3 in Surprise, AZ on April 17th and 18th.

Come by the Papas & Bear pit area to check out Rodrigo’s Pro-lite and Pro-2 truck and pick up some free posters.

Check out Rodrigo’s website for race results, photos and video at: www.papasracing.com

Rodrigo Ampudia is sponsored by:

Papas & Beer is the original Mexican nightclub, bar, & restaurant established in Ensenada, Baja California in1983. Currently Papas & Beer has three locations in Rosarito, Ensenada, and La Paz but is undergoing an expansion with more locations set to open in the United States and Mexico.

For additional news and updates check out: