What do you get when you send fifteen kids on a tour of a dozen skateparks in only two weeks? TOTAL CHAOS! The Next Invasion is an annual skate tour featuring the top-placing contest winners from The Next Cup amateur skateboard contest series. These little rippers all pile into a few vans and one giant RV and make their way from San Diego, CA, to Aspen, CO and back! They hit nearly every skatepark on the way and even find time for some ripping street sessions. This cast of ripping groms includes; Chase Webb, Evan Mirchel, Zak, Nate, Simon, and Noah Prescott, Truman Hooker, Ricky Lovato, Lyn-Z Adams Hawkins, Grayson Fletcher, Oliver Rivas, Michael Anderson, Shaun Stulz, Rob Lorofice, and Tyler Bledsoe! Watch as these kids wow crowds with technical tricks, funny antics, and give out tons of free product to all their fans. Laugh as they trash the vans, hotel rooms and each other every step of the way. This film features some of the best new skaters riding to an awesome punk-rock soundtrack! Pros beware, The Next Invasion is here! 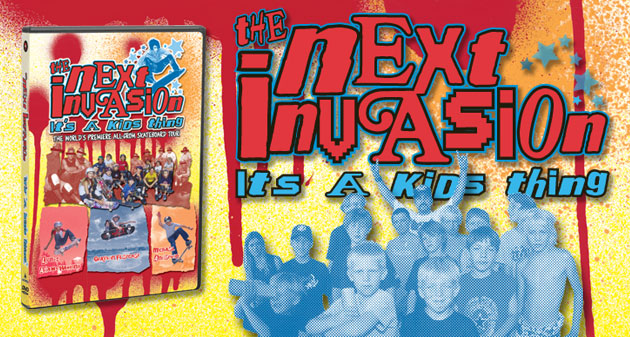